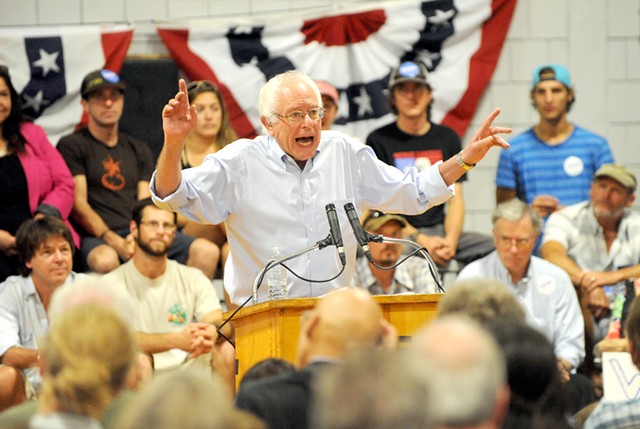 Not long after Vice President Joe Biden announced Wednesday that he would skip the 2016 presidential race, would-be opponent Bernie Sanders saluted his former Senate colleague as "a good friend [who] has made the decision that he feels is best for himself, his family and the country."

"I thank the vice president for a lifetime of public service and for all that he has done for our nation," Sanders said in a written statement. "I look forward to continuing to work with him to address the major crises we face."

At first glance, it might appear that Biden's decision would bolster Sanders' candidacy. After all, what unconventional upstart would want to compete with a political juggernaut boasting establishment support and the ability to attract a diverse coalition of supporters?

As former governor Howard Dean's 2004 campaign manager, Joe Trippi, explained to the Washington Post in August, that year's unconventional upstart, Dean, had something going for him that Sanders does not.

"We faced three establishment Democrats, not one," Trippi said. "John Kerry, Dick Gephardt and John Edwards were three strong candidacies that were splitting the vote and donor support of the party establishment in 2003."

With so many plausible mainstream contenders in the race, Dean was able to pass his rivals in early polls with just pluralities of 30 percent or so in many states.

"Sanders faces a completely different problem," Trippi said. "No one is splitting the party establishment with Hillary. She has it all to herself."

A Biden candidacy would have done just that. The veep would almost certainly have drawn the support of many party insiders, donors, elected officials and operatives. No doubt some of them would have come off the sidelines, but others would have defected from Team Clinton — particularly if her candidacy continued to falter.

As the New York Times' Nate Cohn pointed out Wednesday, polls have shown that Biden did best among moderate, nonwhite and older voters — in other words, Clinton's natural base.

"With Mr. Biden out, Mrs. Clinton is positioned to consolidate a key combination of elite support and moderate voters," Cohn wrote. "The evidence of Mrs. Clinton’s gains could start to trickle in almost immediately, since she was the second choice of nearly all of Mr. Biden’s voters in public opinion polls over the last month."

Biden's decision isn't all bad news for Sanders. Had the VP joined the race, he would have stolen some of the limelight enjoyed by the Vermont senator in recent months. Without him, Sanders remains the chief alternative to Clinton, which means he'll continue to draw headlines and can continue to spread his message to those unfamiliar with it.

Also, just because Biden's not running doesn't mean he won't make mischief. In his freewheeling Rose Garden speech Wednesday, the non-candidate inveighed against the rise of big money in politics — a theme of Sanders' campaign. And he took some not-so-veiled shots at Clinton, particularly her remark at last week's Democratic debate that she considers the GOP to be the enemy.

“I don’t think we should look at Republicans as our enemies,” Biden said.

Perhaps Clinton shouldn't look at Biden as her friend.