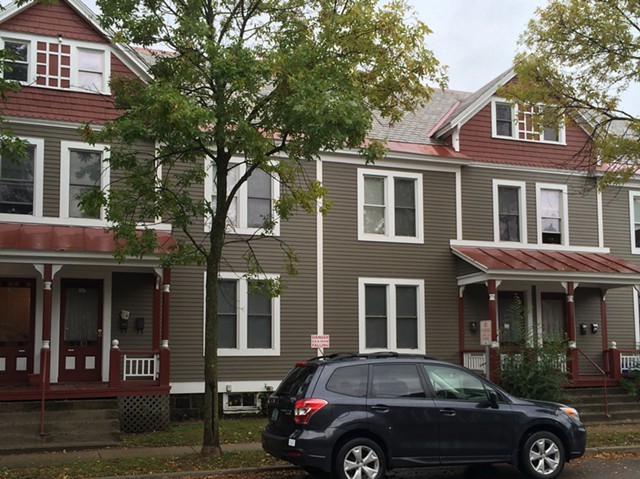 Some prominent Burlington landlords contend that the city violated state and federal law when it reassessed their properties last spring. They allege that Burlington's assessor gerrymandered tax districts, unfairly targeting their properties — and putting upward pressure on rents.

The case is scheduled to go before Burlington's Board of Tax Appeals on October 13.

The group, including Redstone Commercial Group, Green Castle Group, Bissonette Properties and Offenhartz, has hired the law firm Sheehey Furlong & Behm to challenge the recent assessment. They say it affected roughly 2,000 rental units in two tax districts in the Downtown and Hill sections of the city, raising taxes by an average of 30 percent.

Sheehey Furlong & Behm sent what the firm called a white paper to the city last May outlining the landlords' objections. Prior to the reassessment, the city redrew the districts under debate, and, the paper states, "unlike every other tax district within the city, the two new districts are highly irregularly shaped."

Within these geographic regions, the city assessed only buildings with four or more units. Describing this as a new approach, the document states, "it appears to have been invented solely for the purpose of imposing higher tax burden on property owners who may not reside and vote in Burlington, as well as on renters for whom the connection between housing costs and property taxes is less apparent."

Erik Hoekstra is a partner at Redstone. His company only had two properties affected, but, he said, "We’re worried about the precedent it sets."

"Vermont statutes and case law say that when you reassess property, it has to be fair and rational," Hoekstra continued. "When you draw an entirely new map that you just made up and only reassess certain apartment buildings that are of a certain scale, that doesn’t really pass the smell test."

The landlords' conclusion in the white paper: "While it may be politically expedient to target only these property owners and residents ... it is not constitutional."

As Hoekstra explained, "When landlord expenses go up, they say 'How am I going to recover that?'"

The obvious answer: by raising rents. For that reason, the landlords argue, the reassessment will undermine the city's efforts to make housing more affordable.

During a brief interview Friday, city assessor John Vickery declined to speak in-depth about the allegations. But he said his office hasn't violated the law and he called the gerrymandering allegation "outlandish."

Vickery noted that the city reassessed multifamily homes in the Old North End several years ago, and he said the two districts under dispute were redrawn to more accurately reflect different property markets.

As for why those particular districts were chosen for reassessment? "Our job is to even out the tax burden among all taxpayers through a statistical process," Vickery explained, which means prioritizing areas where the differences between fair market value and appraised value are the greatest.

Vickery said his office adhered to that process with the two districts in question. "At the time of the [statistical] study, this was the area with the greatest discrepancies, so we wanted to tackle that," he said. The landlords dispute that.

If the Board of Tax Appeals rules against the landlords, they can appeal to the Board of State Appraisers or to the Vermont Superior Court. Asked how far they would pursue the matter, Hoekstra responded, "We think we have a very strong case."

Business Burlington Board of Tax Appeals property taxes Web Only