Developer Gets Permit for 232 Burlington Apartments, Offers Parkland | Off Message 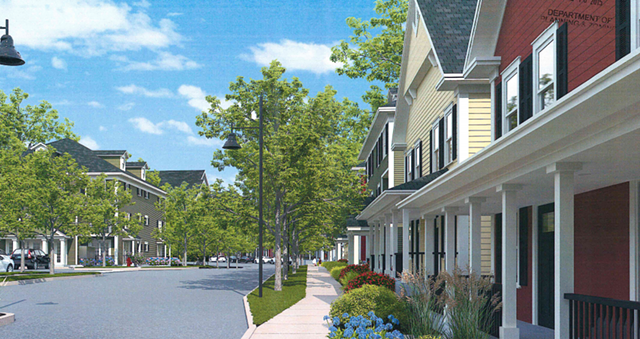 With an Act 250 permit in hand, SD Ireland can finally start constructing a 232-apartment complex on Burlington's Grove Street.

In a new refinement of the project, SD Ireland is offering to donate six acres to the Winooski Valley Park District. Located along the Winooski River, the land includes wetlands and steep slopes, making it ill-suited for development, but desirable for the Park District.

It's been nearly three years since the company unveiled plans to build a new neighborhood on the site where it currently operates its concrete production plant. The project consists of 19 apartment buildings, a maintenance building and a club house.

Burlington's Development Review Board signed off on the proposal last May, after a review that stretched more than a year. The project cleared its final hurdle in August, when the state granted SD Ireland an Act 250 permit. Previously known as the Grove Street Apartments, the project is called Bayberry Apartments in the permit.

The development was scaled back during the review process, in part as a result of concerns raised by neighbors, who worried about traffic and the size of the buildings. Now that the project has been cleared, the developer hired by SD Ireland, Patrick O'Brien, said he hopes to start construction "as soon as we can."

Describing the parcel that could be donated as "a really interesting property from a natural resource standpoint," WVPD director Nick Warner said it fits with the organization's goal of conserving riparian lands. "We are thrilled about this for a whole bunch of reasons."

Since the six-acre property borders another property already owned by the WVPD — known as the Valley Ridge parcel — it would create 24 contiguous acres of protected land. A new trail, starting at Schmanska Park on Grove Street, would allow access.

Warner emphasized that WVPD hasn't accepted the donation yet, and he said park district staff will discuss the plans with city officials and nearby residents before making a final decision. WVPD will also need to sign an agreement with Burlington to use a city-owned parking lot near the planned park entrance. Burlington's Parks and Recreation director, Jesse Bridges and other city officials have expressed their support.

The last time the park district, which manages 1,750 acres across seven cities and towns, expanded its holdings was in 2012, when it acquired the Muddy Brook Wetland Reserve in South Burlington.