Gov Candidate Sue Minter Pitches Herself As a Problem-Solver 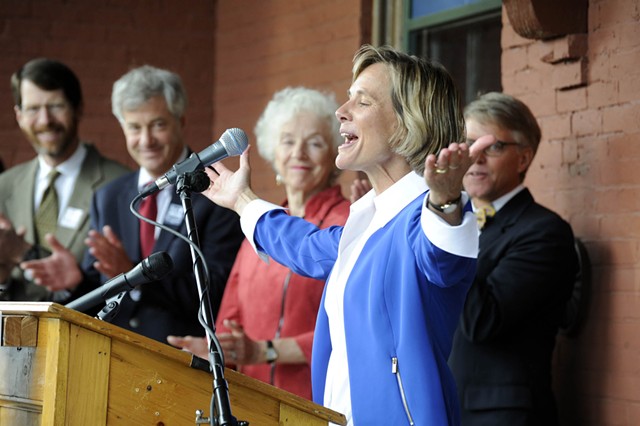 Sue Minter stood before more than 100 supporters Tuesday afternoon as she kicked off her campaign for governor in her hometown of Waterbury. “I’ve been told that not many Vermonters know who I am,” she acknowledged.

With the help of some friends and political colleagues, Minter sought to introduce herself as an experienced, energetic problem-solver.

“I am Sue Minter, and I’m running for governor to make Vermont work,” declared the 54-year-old former transportation secretary and state legislator. She was flanked by family, former governor Madeleine Kunin and former lieutenant governor Doug Racine on the porch of the renovated historic train station.

“Vermonters don’t need politicians who just talk about problems,” Minter said, highlighting her experience as the state’s recovery officer after Tropical Storm Irene struck in 2011. “They need a leader who brings people together to help solve problems.”

Minter grew up in Pennsylvania and Rhode Island and moved to Vermont in 1991. She is one of at least three Democrats seeking the party’s nomination for governor next year after three-term incumbent Democratic Gov. Peter Shumlin announced he’s retiring. Introducing herself to Vermonters will be Minter’s first challenge.

She was the third Democrat to join the race and the third to hold a campaign kickoff. A poll last month indicated Minter trails in name recognition behind fellow Democratic candidates Shap Smith, who has served seven years as House speaker, and Matt Dunne, a former state senator who ran for governor in 2010.

Friends on Tuesday told stories of Minter as an ice-skating instructor, soccer coach, mother and neighbor. Political colleagues called Minter, who has degrees from Harvard University and the Massachusetts Institute of Technology, a smart, hard-working leader.

Heidi Gortakowski said she was 11 years old when she started taking ice-skating lessons from Minter years ago. Minter insisted they do a last round of laps after a tiring workout. “She’s telling me, ‘This is what builds endurance, this is what makes us stronger,'" Gortakowski said. “I take it with me wherever I go.”

Tom Drake, principal of Crossett Brook Middle School in Duxbury, said Minter has impressed him and that she makes every kid at the door on Halloween feel special.

Kunin, the state’s only female governor, who took office 30 years ago, said she was passing the proverbial torch to Minter, but emphasized, “She’s the most qualified candidate, regardless of gender.”

Minter hit on many of the same themes as her opponents — strong schools, a robust economy, health care — but the former transportation secretary noted after her speech she might be the only one who dwelled on infrastructure.

“As I led the agency, I also saw firsthand how infrastructure can actually grow our economy and transform communities,” she said, citing public-private investments in St. Albans and Barre. “As governor, I will expand strategic investment and public-private partnerships to rebuild our crumbling infrastructure in ways to renew our communities and help grow our economy.”

David Mears, who last summer returned to teach at Vermont Law School after five years as state Department of Environmental Conservation commissioner, said he’s firmly in Minter’s camp after working with her.

“I got to see what a leader she is,” Mears said. “Before she made an indication she was thinking of running, I was calling her, saying, ‘Please run.’”