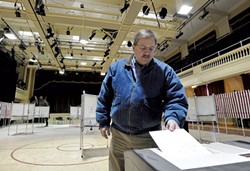 J.P. Isabelle is a state employee who expressed his opinion about the upcoming gubernatorial race on a blog. He’s also shown his political colors on Twitter. State policy clearly states that an employee, on his or her own time, can do that.

But Isabelle works in the elections division of the Secretary of State’s Office as elections administrator. Does he have that same right?

Vermont Republican Party chair David Sunderland said no. Sunderland sent a letter to Secretary of State Jim Condos on Friday complaining about Isabelle. “I write today to bring a concerning display of political bias to your attention,” Sunderland’s letter said.

He particularly complained about a comment Isabelle made on the blog Vermont Political Observer, in which Isabelle defended Democratic gubernatorial candidate Matt Dunne. He also pointed out two tweets that suggest Isabelle leans Democratic and toward Dunne.

“It struck me as being certainly inappropriate, maybe unprofessional,” Sunderland said. “It’s like an NFL referee coming out wearing one team’s colors.”

Isabelle has also retweeted various messages from Sen. Bernie Sanders (I-Vt.), who is seeking the Democratic nomination for president. On the night of the Republican presidential debate, Isabelle posed the question: “When is the smart people debate?”

Before Sunderland raised the issue Friday, Condos said, he had already seen Isabelle’s comment on the Vermont Political Observer, wasn’t so keen on it himself and asked Isabelle “to respect the office and to refrain because of his position.” But Condos said he can't bar Isabelle from exercising free speech. He said that Isabelle has done nothing illegal and has no policy making authority.

“I am confident that he will continue to perform his job in a dedicated and fair manner, as he always has,” Condos said in a letter back to Sunderland later Friday.

Sunderland acknowledged that the Republican party and Republican candidates who frequently work with Isabelle on campaign filings have never indicated he treated them unfairly.