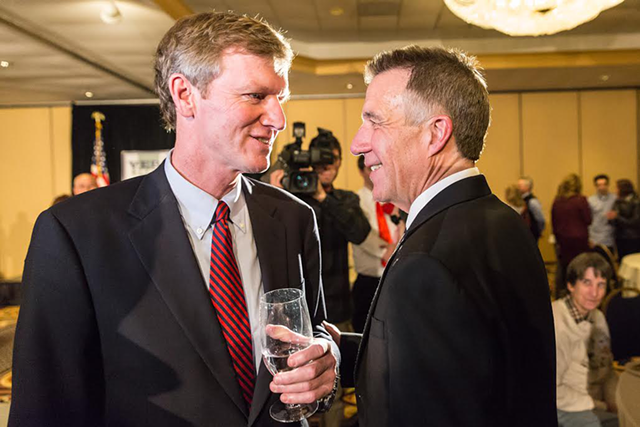 “I’m extremely happy Phil is in the race and I’m supporting Phil in the primary,” Milne said. “I expect I’ll support him in the general election. I think he’s going to beat [retired Wall Street executive] Bruce Lisman in the primary.” Not a big surprise, given that the two graduates of Barre’s Spaulding High School have similar political leanings.

But as is often the case with Milne, the backing comes with some nuances. In some comments to news media he’s left the door open to joining the race — as if he is to Phil Scott as Joe Biden is to Hillary Clinton — possibly ready to run, just in case.

Just last week, Milne was characterizing his own run for governor in 2016 as "unlikely," but he wasn't dismissing it. "Right now, I see me being in the same race with my friend as unlikely," he told Seven Days.

The Woodstock Standard reported last week, “Though Milne hasn’t officially said he won’t be a candidate, he said the likelihood is small because his respect for Scott is too big.” WCAX-TV reported Tuesday that Milne supports Scott, but added: “Milne says he would only get in the governor's race if Scott was to falter.” Wait, does he expect Scott to falter? “No, I expect Phil to win the nomination,” Milne told Seven Days.

Milne said he’s still considering his role in the 2016 election. "Whether it's as a candidate or helping others, I plan to be involved," he said. "People have encouraged me to run for governor, lieutenant governor, U.S. senator and the state legislature."