Confederate Flag Riles Some City of Burlington Employees | Off Message 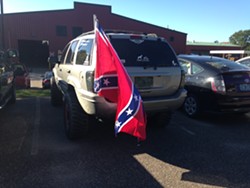 A free speech debate about the Confederate flag is unfurling at the Burlington Department of Public Works.

A worker there who flies a large Confederate flag on a personal vehicle is upsetting some coworkers who don't want the flag in the department's employee parking lot.

City administrators, though, say the flag is within the boundaries of free speech. The Vermont chapter of the American Civil Liberties Union agrees.

When an employee started flying the flag recently, people noticed. It's a symbol of racism and hate, and it shouldn't be allowed in a city employee lot, said Tim Ahonen, a department code enforcement officer. He asked his boss, public works director Chapin Spencer, to order the flag removed.

Spencer replied that the employee has a right to fly the flag.

"I have checked with others in the city and we do not believe that we can prevent an employee from having a flag on their private car," Spencer told Ahonen via email. "The flag is a political statement that is in a public area as opposed to an enclosed work environment where employees are required to be to do their work. The analysis would be different if the employee wanted to put it on a plaque on his/her desk, for example."

Spencer declined to elaborate when contacted by a reporter and referred Seven Days to Burlington city attorney Eileen Blackwood.

Ahonen was unhappy with the city's response and forwarded his email exchange with Spencer to Seven Days. In a brief interview Wednesday, Ahonen declined to identify the employee flying the flag from his car, but said that when the red and blue symbol of the Confederacy showed up on the employee's Jeep Cherokee in the BPW lot a few days ago, he wasn't the only one who was unhappy.

“There are other people that are concerned,” Ahonen said.

He was reluctant to speak further, saying he'd been asked not to communicate with the press.

Wednesday morning, the Jeep with the flag was parked in the employee lot off Pine Street next to public works headquarters. The driver did not immediately respond to a note Seven Days left on the windshield seeking comment.

The city of Burlington made the right call, even though it's a difficult situation, said Allen Gilbert, executive director of American Civil Liberties Union of Vermont. Free expression is protected under the First Amendment, he noted.

“We get incidents like this that always test our commitment to the doctrine of free speech and free expression and we usually do the right thing even though it's uncomfortable to have somebody with a Confederate flag parked next to you,” Gilbert said.

Freedom of speech allows us to express opinions that may be different, Gilbert said. "We've always believed as a country that this mixing of ideas and viewpoints is important for a democratic society," he said.

That said, it's understandable for people to be offended by the Confederate flag display, Gilbert said.

“It's no longer associated just with a battle flag for one side in the Civil War," he said. "It's become a flag that for many people symbolizes racism and oppression of people based on the color of their skin."

Gilbert suggested that while the city cannot forbid the flag in the parking lot, perhaps managers could speak with the person displaying it on the car and ask: "Would you consider possibly taking it off so you don’t upset other employees?"

South Carolina's decision to remove the Confederate flag from the grounds of the state capitol earlier this year has generated fresh debate about the flag and anything to do with it. Vermont has been part of the conversation.

For example, some residents are asking the school board to drop the "rebels" nickname at South Burlington High because it was once associated with displays of the Confederate flag at the school. Other residents say the flag and other allusions to Dixie were dropped at least 20 years ago and the rebels moniker is a harmless nod to the spirit of independence and freedom.