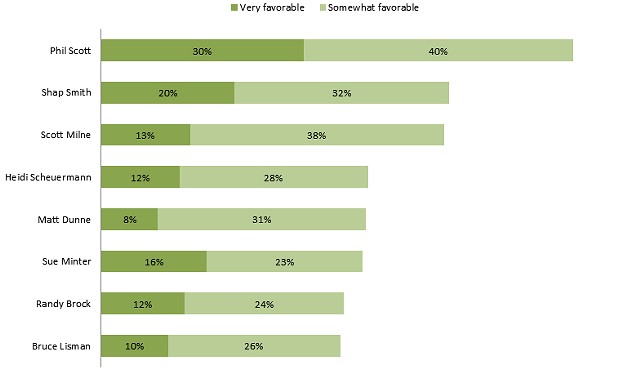 More Vermonters know Lt. Gov. Phil Scott and view him favorably than any other candidate in the 2016 gubernatorial race, according to new data released Monday by the Castleton Polling Institute.

"He's in an enviable position," says Rich Clark, who directs the polling institute and conducted the survey.

That's not altogether surprising, given that Smith's position in the House has kept him in the headlines for years, while Dunne has run for statewide office twice before — most recently for governor in 2010. Minter, also a former state representative, has never run for office outside her Waterbury legislative district.

Scott's dominance in name recognition is likely attributable to the fact that he is the sole incumbent statewide official in the race — and the only one who's been on statewide ballots for the past three elections.

But Smith also has plenty of detractors, the poll found. More voters view him very unfavorably (16 percent) than any other candidate tested. When Clark subtracted the percentage of those who feel generally negative about the candidates from the percentage who feel generally positive about them, he found that all three Democrats have a roughly equivalent net favorability.

The poll's overall margin of error was plus or minus 4 percent, though the margin was higher for subsamples, such as the favorability of individual candidates. 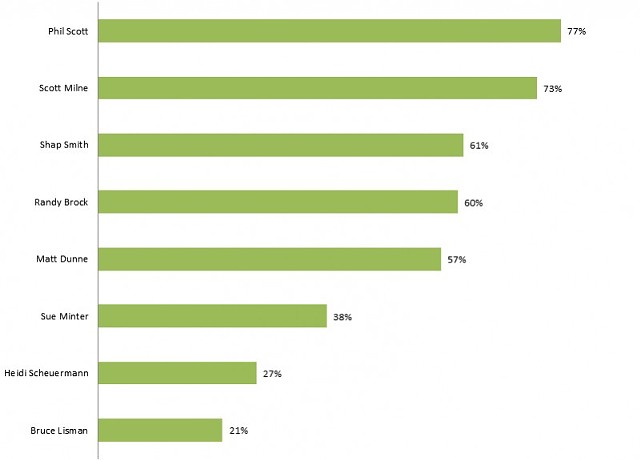 Most surprising to Clark, he says, was how few people were aware of any of the candidates.

"I really thought people knew who Bruce Lisman was," he says. "And I thought everybody would know who Shap Smith was, to be honest."

That's not such a bad thing, Clark notes. Those such as Minter, who are least known by the electorate, have the greatest opportunity to make a good first impression on voters.

"She's got a lot of people who don't know her. That means she has a chance to move those [voters] in a very positive direction," Clark says.

In the three-week period during which Castleton was calling Vermonters, four of the candidates — Scott, Dunne, Lisman and Minter — formally declared they'd enter the race. Clark says Vermonters' awareness of Lisman grew measurably in the days after he announced his intentions. 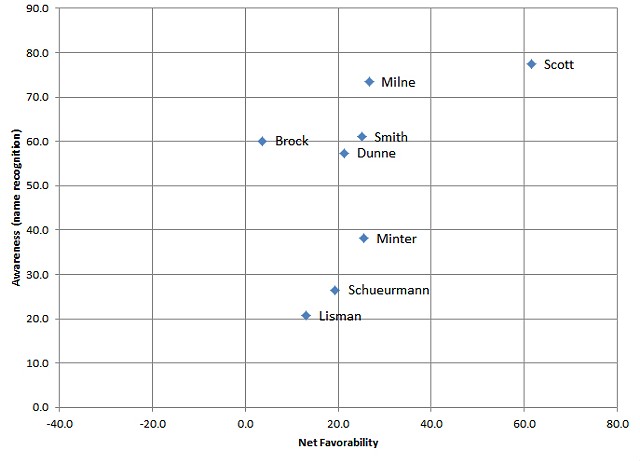 Castleton didn't just ask about declared candidates. After Scott, the best known potential candidate was the GOP's 2014 Republican nominee, Scott Milne, who nearly defeated Democratic incumbent Gov. Peter Shumlin. Some 73 percent said they were familiar with Milne. Sixty percent — or roughly the same as Smith and Dunne — said they were familiar with 2012 Republican nominee Randy Brock.

Neither Milne nor Brock have revealed their plans, though both have been discussed as potential gubernatorial or lieutenant gubernatorial candidates.

Clark says he opted against asking voters to choose between the various candidates because it remains so early in the race and such data would not likely reveal much. But he says he hopes the awareness and favorability ratings will be a helpful baseline to compare to future results.

"What I was hoping to do with this is to kind of give us a sense of the candidates at the start. This is where the public sees them before any of the campaigning happens," he says. "And so when we get to the middle and the end, we have a clearer view of from where they came."