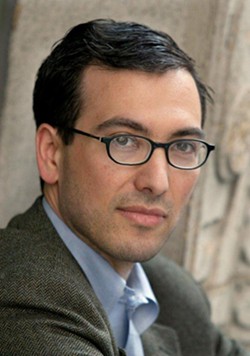 New York Times investigative reporter Eric Lipton will take a break from afflicting the powerful to visit Burlington and give a speech Monday night at his alma mater, the University of Vermont.

The 1987 UVM grad will talk about the methods and inspiration for his stories, including the series "Courting Favor." It won a Pulitzer Prize in April, Lipton's second.

The series uncovered a disturbing trend, showing how corporate lobbyists and lawyers gain influence over state attorneys general. To land the stories, Lipton doggedly amassed 8,000 pages of public records. He also got kicked out of a posh California beach resort where lobbyists mingled with AGs.

Lipton has not been idle since the Pulitzer win. Recent bylines include an exposé on a lobbyist with a six-figure federal government job and a look at how both the organic food industry and companies like Monsanto are influencing academic research being cited in the debate over genetically modified crops.

Is it stressful to puncture the careers of politicians, lobbyists and executives on a regular basis? The pressure doesn't usually get to Lipton. "To me, as long as the story is accurate and fair, it doesn't bother me," he said in a phone interview from the Times' bureau in Washington, D.C., where he is based. Lipton added that he's learned to "tune out the nasty emails, which I get a fair amount of."

Lipton grew up in suburban Philly in a household where his dad read three newspapers a day. He majored in philosophy at UVM and served as editor of the Cynic student newspaper. He will spend time with Cynic staff and visit a UVM class or two during his visit.

His talk Monday, titled “Lobbying in America: White Hats, State Troopers, Ski Resorts and Buckets of Money,” is free. It starts at 7 p.m. in the Silver Maple Ballroom at the Davis Center on campus. VTDigger and UVM are co-hosting Lipton's talk.

Lipton hopes to do a little hiking while in Vermont and eat at least one meal at Leunig's Bistro and Café before he returns to Washington, D.C., and the ample fodder it provides for an investigative journalist.

“I have a much longer list of stories than I can possibly keep up with because there are just so many examples of deceptive practices,” Lipton explained. “The biggest problem is that I'm totally backlogged."