GAO: Vermont's Health Exchange More 'Operational' Than Others | Off Message 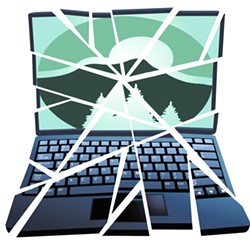 Vermont Health Connect has frustrated users ever since its launch because it doesn't fully work. That has led to backlogs of thousands of residents trying to change parts of their health coverage.

So it's a surprise that, buried in a recent U.S. Government Accountability Office report to Congress on state health insurance exchanges, a chart says Vermont had more fully functioning technology than other states operating their own marketplaces.

"What this means is that we have made some major improvements over time," said Steve Costantino, commissioner of the Department of Vermont Health Access, which oversees the exchange.

The focus of the 109-page GAO report was the effectiveness of federal oversight on the technology projects associated with the health insurance exchanges.

Vermont's showing is found in a table on page 38 that measured the operational status of four technology functions, at least as of last February. The chart says Vermont's exchange was considered fully operational in determining eligibility and enrolling applicants, in financial management and in reporting information to the Internal Revenue Service. It was rated as partially operational in its ability to verify identities, citizenship and Social Security numbers.

In fact, the Connecticut exchange is one that Lt. Gov. Phil Scott had suggested Vermont might want to partner with since, he said, it had fewer problems with its launch. Back in April, he arranged a meeting with University of Vermont alum Wadleigh, two Vermont senators and a Rhode Island exchange official to talk about collaboration opportunities.

Vermont's exchange, meanwhile, still has 3,200 open requests for changes to enrollment documents. Officials said in the spring they wanted to eliminate the backlog before customers begin re-enrolling on November 1.

Gov. Peter Shumlin set several deadlines for Vermont Health Connect, and said failure meant the state would consider alternatives such as going with the federal exchange. Target one was having an automated change-of-circumstance function by June 1, which state officials said was achieved.

The next deadline is to have the automated renewal function installed by October 1 so it will be ready for the public to use on November 1.

Costantino repeated a line that he and other officials have used all year: "We are pretty confident we will meet those milestones."