Watching the GOP Presidential Debate With Vermont Republicans | Off Message 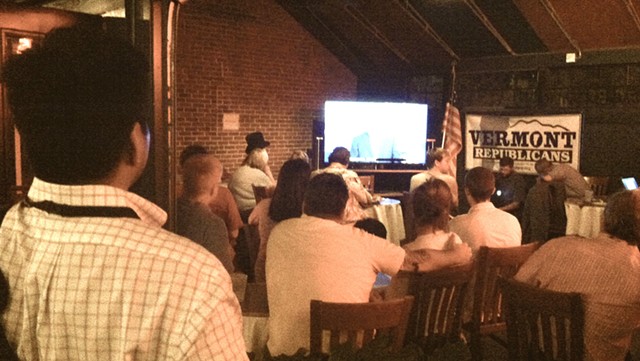 On campus at the University of Vermont, Jason Maulucci finds himself surrounded by students feeling the bern, as they say, for presidential candidate Bernie Sanders. But Maulucci is a Republican.

“It’s not the easiest thing in the world,” said the 20-year-old political science and economics major from Bolton, Conn. “I tell people, ‘Five years from now it’s the fiscal issues that are going to matter to you.’”

So Maulucci came down the hill Wednesday night to Halvorson’s Upstreet Café, where he joined about 50 Vermont Republicans to watch the GOP's 11-candidate presidential debate.

The event, put on by the Vermont Republican Party, was intended to rev up the GOP’s younger set. Roughly half the crowd fit that definition. There were more button-down shirts and khakis than you might find at a Sanders rally. And perhaps a stronger preference for Budweiser than craft beer.

“This is the party of the young people of the state of Vermont,” said 30-year-old Sen. Dustin Degree (R-Franklin County), encouraging those a decade younger than him to follow his footsteps into politics.

Maulucci, president of the UVM College Republicans, is sold on the idea already. He worked on Republican legislative races last year and said he plans to be involved in next year’s Vermont elections.

But the focus Wednesday was on national politics. As he munched on fried chicken tenders that he said were better than whatever he would have cooked up for dinner, Maulucci said he was not so impressed with Donald Trump, who seemed to be getting an inordinate amount of airtime in the CNN-sponsored debate.

“He sucks up all the oxygen,” Maulucci said. “The other candidates have to resort to ridiculous things to get headlines.”

If Trump was scoring points somewhere in America on Wednesday night, it wasn’t in the back room of Halvorson’s. Just about the only audible reaction from the crowd all night came in the form of derisive laughter at Trump’s insults. They guffawed when he said former New York governor George Pataki “couldn’t even be elected dog catcher in New York."

With 11 candidates on stage and another four on the not-quite-prime-time, pre-debate stage, the crowd at Halvorson's appeared not to be united around any one candidate, or even one issue. When the on-air audience in California cheered about defunding Planned Parenthood, the crowd in Burlington was silent.

Scott said he doesn’t have a favorite yet.

Scot Shumski of Burlington was sporting a Carly Fiorina T-shirt.

Maulucci said Bush was his favorite. “I think Jeb has got a proven record,” he said.

Halfway through the debate, Maulucci couldn’t help but measure the candidates by how they were faring against Trump, even as he expressed frustration that Trump’s trash-talking was diverting the conversation from the economic issues. Bush stood up well, he said, and Fiorina was impressive.

On campus, said Maulucci, who is president of the UVM student government, political talk is almost all about Sanders.

“Bernie’s everywhere,” he said. “I haven’t met a Hillary (Clinton) supporter yet.”

As a Republican sitting in political science class at UVM, he said, he has to be on his game. “When you explain your position and explain it well, people listen to you,” he said. “It makes you question yourself.”