Sanders' Bid to Be a Conscientious Objector Draws Attention | Off Message

Sanders' Bid to Be a Conscientious Objector Draws Attention 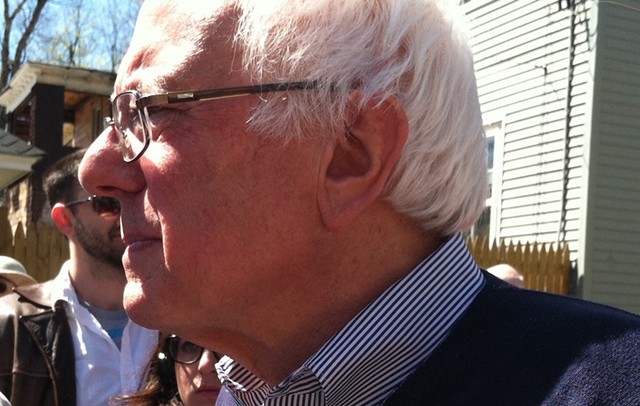 Updated at 5:30 p.m. on 9/3/15 to include Sanders' remarks to the editorial board of the Des Moines Register.

When he was the mayor of Burlington, a congressman, and even after he became a U.S. Senator, this tidbit didn't lead to any raised eyebrows: Bernie Sanders applied for conscientious objector status back during the Vietnam War. Hardly seems out of character.

Now that Vermont's independent senator is vying to be president, that's getting a little more attention. The president, after all, has his or her finger on the button.

Can a conscientious objector be the commander in chief of the United States? That’s the question Vietnam veteran Steve Wikert of Iowa asked in a column published Tuesday in the Des Moines Register. Some national media outlets have picked up the story.

Sanders' application for conscientious objector status was denied — but not before he was too old to be drafted. That’s not breaking news, having been included in a Burlington Free Press profile in 2006, the year Sanders won a seat in the U.S. Senate. CNN also has included it in a list of “fast facts” about Sanders.

Sanders’ spokesman, Michael Briggs, confirmed that Sanders applied to be a conscientious objector. He told ABC News that Sanders was a pacifist as a college student in the 1960s but no longer is today.

Pacifists oppose war and violence. Sanders, who spoke strongly against the war in Iraq, is apparently not that. Sanders supported the U.S.-led bombing campaign against Serbia in 1999 after massacres in Kosovo.

Asked Wednesday how he would define Sanders’ stance further, Briggs wasn’t sharing. “I don't have any more for you,” the spokesman said.

Sanders clarified his stance in an interview Thursday with the editorial board of the Des Moines Register. "War should be, in my view, the last resort of a great nation. We should explore every other option," he said. "It is an option, and I, as president of the United States, certainly would have that option available."