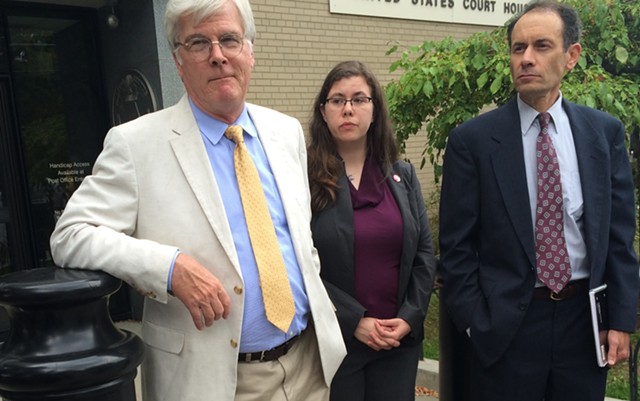 The attorney representing former Vermont lieutenant governor candidate Dean Corren told a judge Monday that a campaign finance lawsuit filed against Corren could have a chilling effect on candidates who want to use public financing in the future.

Corren, who ran on the Progressive and Democratic lines, appeared in U.S. District Court Monday in his fight against a Vermont Attorney General's Office lawsuit alleging that he violated campaign finance laws during his failed 2014 bid. Corren, who lost to Republican Phil Scott, received about $180,000 in public money for his campaign. As part of accepting public financing in Vermont, candidates agree not to seek contributions from outside sources.

Vermont Attorney General Bill Sorrell alleges that Corren violated this law when he asked the Democratic Party to send out an email touting his candidacy to 19,000 people on the party's list. Sorrell sued Corren in state court, seeking to have him pay $72,000 in penalties. (The email itself has been valued at $255.)

Corren in turn sued Sorrell in federal court, seeking a ruling that the email did not represent a campaign contribution. Corren also claimed that certain aspects of Vermont's campaign rules governing public financing are illegal.

"Just because you take public money doesn't mean you leave your constitutional rights at the door," Corren's attorney, John Franco, said during the hearing. "We're up against an unconstitutional statute that requires us to self-censor."

The state court has delayed proceeding on Sorrell's lawsuit against Corren until the federal case is resolved. That could take several months and last into the legislative session and the 2016 campaign.

Assistant Attorney General Megan Shafritz on Monday asked Judge Williams Sessions III to dismiss Corren's lawsuit. The entire case, Shafritz argued, should proceed in state court. Shafritz said that had Corren simply allowed the state case to go ahead, it may have concluded this fall.

“This is a procedural tactic by Mr. Corren to hold that up," Shafritz said in an interview after the hearing.

Corren has said that he is considering running for lieutenant governor again, but would only do so if the lawsuit against him failed.

Sessions did not make any decision Monday. At times, he questioned whether the attorney general's actions were disproportionate to the harm caused by a $252 email. But Sessions also said that ruling for Corren could theoretically topple Vermont’s public-financing system.

If Sessions decides that Corren had a right to seek outside support even after accepting public money, he wondered, wouldn’t he effectively topple the public-financing system?

“Then every [candidate] would go take public financing, because it wouldn’t restrict their ability to get money beyond that,” Sessions said. “Then the state would say, ‘What’s the point of public financing?' It goes right to the heart of the public-financing system.”