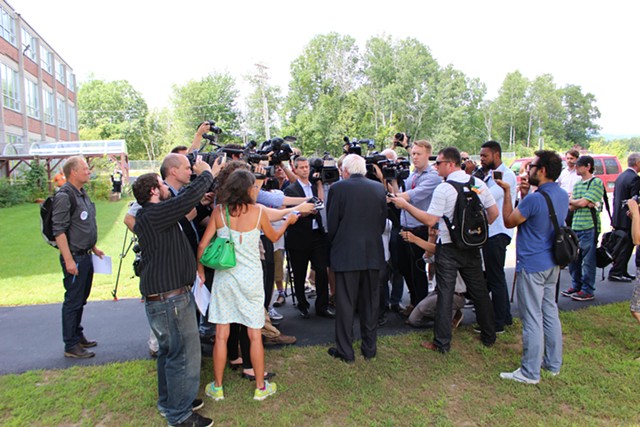 Sen. Bernie Sanders (I-Vt.) rarely gets through a speech without criticizing the media for covering campaigns as if they're a "soap opera or a baseball game."

But even Sanders couldn't resist the opportunity Monday to handicap the presidential horse race during a brief media scrum in Conway, N.H. When a reporter noted that many pundits believe Vice President Joe Biden's flirtation with a presidential run was "a direct result of the frontrunner Hillary Clinton's vulnerability," Sanders said he sensed that vulnerability.

"Well, I think the evidence is pretty clear," the senator said. "We are gaining. I think what the polls seem to indicate is that Hillary Clinton's support seems to be receding a bit. But we've got a long way to go. Joe would be a formidable opponent."

Asked several times about Biden and his not-so-subtle machinations, Sanders struck a positive note, saying, "You're not going to find a guy who's more decent than Joe Biden is." But he also made clear that he was ready to take on his former Senate colleague.

"What I promise Joe, if he decides to get into this race, is that I will, as I have done up 'til now, run an issue-oriented campaign," Sanders said. "Joe's views, I suspect — I know — on a number of issues are very different than mine. And what the American people are entitled to is a serious debate on serious issues."

Asked about a widely publicized meeting Biden held over the weekend with another liberal darling, Sen. Elizabeth Warren (D-Mass.), the Vermonter appeared to insinuate that the vice president was an "establishment" politician.

"Well, you know, I've had many meetings with Elizabeth Warren. She's a very, very good friend of mine. People meet with different people," Sanders said. "I think that, to be honest with you — and this is not a comment on Joe — bottom line is, I think people understand that there is something profoundly wrong today with establishment politics."

For more on Sanders' trip to the North Country of New Hampshire, see this week's Seven Days.