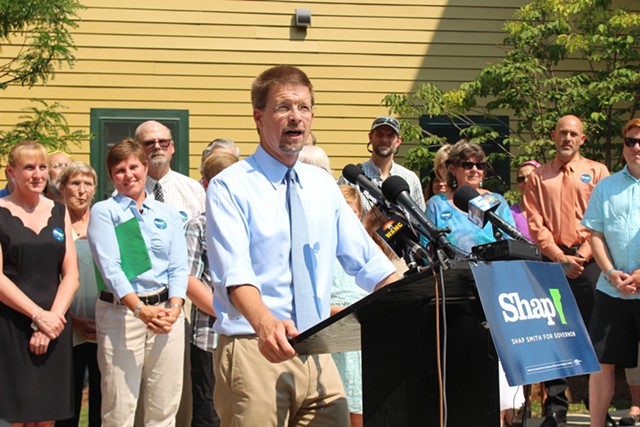 Surrounded by family members and colleagues, House Speaker Shap Smith (D-Morristown) kicked off his campaign for governor Wednesday in his hometown of Morrisville, declaring that he would make Vermont “the state of opportunity.”

"I'm running for governor because the success of towns like Morrisville will be a vital part of Vermont's future and because I want every Vermonter to have the opportunities and the choices that I've had," he said.

With that declaration, the seventh-term House member and fourth-term speaker became the first candidate to officially declare his bid to replace Democratic Gov. Peter Shumlin, who announced in June he will not seek reelection in 2016. Smith is expected to face stiff competition in a Democratic primary that could include former state senator Matt Dunne and Secretary of Transportation Sue Minter — and a general election that could include Lt. Gov. Phil Scott, a popular, third-term Republican.

Joining Smith for his announcement were dozens of current and former members of the Vermont House, who stood with him under a sweltering summer sun. He was introduced by a local childcare provider, Tracy Patnoe, and by his wife, physician Melissa Volansky.

“Shap understands how hard it is to juggle daycare, sick days, after-school, family meals, school lunches. He gets it because he lives it every day,” Volansky said. “And as anyone who works with him knows, he’s an intelligent, capable and determined person, who usually accomplishes what he sets out to do with honesty and integrity.”

Smith made no specific policy declarations in his announcement speech, preferring to speak in broad brushstrokes about his vision for the state. The Connecticut native, whose family moved to Vermont when he was 5 years old, focused on his ties to Lamoille County — and held out his hometown as an example for the state.

"Like Morrisville, Vermont has to invest in itself," Smith said. "We need to draw on the passion and talents that are found in every corner of this great state. We need to create the Vermont that we want. Every Vermonter I talk to all around the state wants to make our state strong and successful. It gives me great hope for our future."

As we reported in this week’s Fair Game, Republicans have sought to paint Smith as no different from the governor he’s seeking to replace. But in a question-and-answer period after his announcement speech, Smith distanced himself from Shumlin.

“I think anybody who has met us knows that we’re pretty different people, and I think Vermonters will figure that out pretty quickly,” he said.

Asked how he thought Shumlin has done as governor, Smith highlighted the incumbent’s efforts to steer the state through a financial downturn and a debilitating tropical storm.

“I think Peter has done, overall, a good job under tough circumstances,” Smith said. “Have their been some areas where you know we’ve had some challenges? Yes. The health care exchange did not work the way that any of us would have wanted it to — and that has been a huge problem. And we need to figure out a way to make things like that better.”

The speaker also differentiated himself from the governor in another crucial respect: He declined to endorse Shumlin’s oft-stated pledge to avoid raising what the incumbent refers to as “broad-based taxes” — namely, those that target income, sales, rooms and meals.

“I’ve never been somebody who’s been willing to take a ‘no anything’ pledge, because I think you lock yourself in before you even figure out what the challenge is,” Smith told reporters. “And I don’t think that’s a good idea.”

Calling himself a “pragmatic progressive,” Smith pushed back against criticism from liberals who believe he has not fought hard enough for their priorities. He cited his efforts to reduce the number of uninsured Vermonters, increase access to affordable housing and legalize gay marriage. 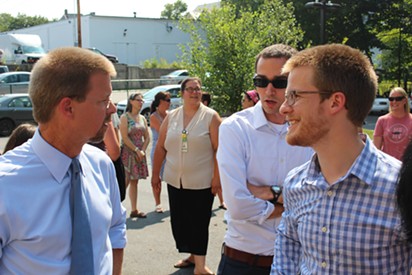 In addition to his House colleagues, Smith turned out a number of prominent Democrats to his announcement, including former Shumlin chief of staff Liz Miller, a longtime friend.

“I know that he’s in this for all the right reasons — for all the reasons every Vermonter would want somebody to run for governor,” Miller said. “I know that if he wins, he’ll do a fantastic job.”

Smith will have plenty of help with his candidacy. In addition to campaign manager Liz Sortino and consultant Selene Hofer-Shall, he was joined by two other eager volunteers: Dylan Giambatista and Tom Cheney, his current and former House assistants. Both said they’d taken the day off from their state jobs — Cheney now works for the Department of Human Resources — to show their support for Smith.

Floyd Nease, who served as Smith’s first House majority leader, praised his former colleague for bringing together a team of rivals when he was first elected speaker.

“He has great integrity. He’s smart. He’s somebody who understands an issue really quickly and wraps his mind around it,” said Nease, who recently left a job as a Statehouse lobbyist for Shumlin. “For him, the first question is: Is the policy right for Vermont? He’ll worry about the politics of it later.”