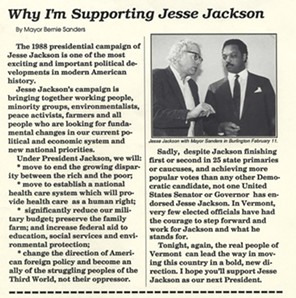 Four years later, Sanders endorsed Jackson's 1988 campaign, introduced him at a University of Vermont speech and held a fundraiser for him at the Windjammer Restaurant.

Now, some three decades later, the tables are turned. During a brief fundraising trip to Chicago on Monday, Sanders — now a U.S. senator and candidate for the Democratic presidential nomination — sought Jackson's counsel.

While the precise nature of the meeting wasn't clear, a Sanders spokesman indicated in a brief statement that the two discussed matters related to racial justice. Twice this summer, the candidate has been confronted by Black Lives Matter protesters during public events, forcing a strained discussion about his commitment to fighting discrimination.

"Longtime friends, the senator and the civil rights leader held a very productive, hour-long meeting on important issues confronting the country and the African American community," spokesman Michael Briggs wrote in the statement.

Jackson confirmed the meeting Monday on Twitter, but did not provide further details. His office did not immediately respond to a request for comment.

Jackson and Sanders share a long history of dialogue. When the former visited the latter in 1984, the two discussed "national and international issues," according to a Burlington Free Press story from the time. 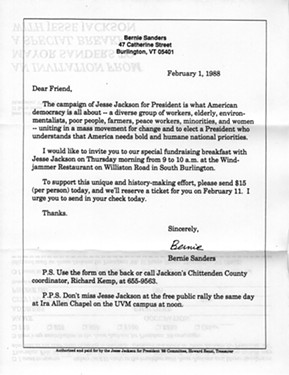 "There's a lot better uses for people's tax dollars than supporting military dictatorships," the Freeps quoted Sanders as saying after the meeting.

Sanders described Jackson as "an interesting, dynamic man," but declined to endorse the Democratic candidate, saying he would not involve himself in party politics. The mayor later told the Rutland Herald that though he and Jackson shared a similar ideology, "Jesse believes that serious social change is possible within the Democratic party. I don't."

By 1988, Sanders had overcome those reservations.

In a fundraising invitation Sanders sent to supporters in advance of Jackson's February 1988 visit to Vermont, the mayor wrote, "The campaign of Jesse Jackson for President is what American democracy is all about — a diverse group of workers, elderly, environmentalists, poor people, farmers, peace workers, minorities, and women — uniting in a mass movement for change and to elect a President who understands that America needs bold and humane national priorities." 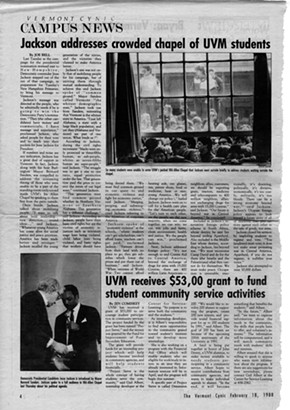 Jackson drew so many supporters to his UVM speech that year that he and Sanders were "compelled to address the screaming throng of those who were unable to be a part of the standing-room-only-crowd inside UVM's Ira Allen Chapel by speaking to them first from the patio outside," according to a Vermont Cynic story from the time.

When he introduced Jackson at the event, Sanders sounded many of the same themes that drive his presidential campaign today.

"What Jesse Jackson understands is that no real political change is going to take place in our country unless the ordinary people — the people who struggle to pay their electric and telephone bills, their rent or mortgage payments, their health care bills, the tuition for their children's education or their farm loans — begin to stand up and fight for their rights," the mayor said, according to his prepared remarks.

"Jackson, alone of all the major party candidates, says clearly that we must make fundamental changes to our political and economic system in which the richest one percent of the population own over 50 percent of the wealth, and a system in which banks and giant corporations and their millionaire owners dominate many aspects of our lives," he said.