Blue Cross Blue Shield to Get 5.9 Percent Rate Hike in Vermont | Off Message 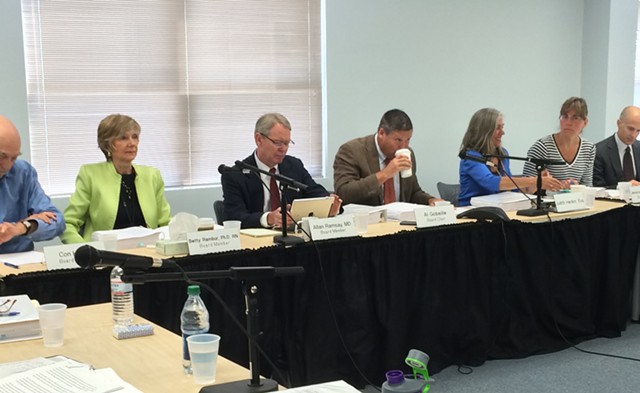 The Green Mountain Care Board refused to grant Blue Cross Blue Shield the 8.6 percent rate increase it wanted for the insurance policies it will sell on Vermont Health Connect in 2016. Instead, the board approved a lesser 5.9 percent increase, which still displeased consumer advocates.

“How many of the 65,000 people covered by Blue Cross in Vermont will get a 6 percent raise next year?” asked Megan Sheehan, co-director of the Vermont Workers’ Center, which coordinates the Campaign for Health Care as a Human Right. “The Green Mountain Care Board is condemning thousands of Vermont residents to increased financial hardship."

The testimony of seven people affiliated with the Health Care as a Human Right at the Blue Cross rate hearing had put human faces on the potential impact of the increase. The board also received written comments from 450 people, many using a template provided by the Vermont Public Interest Research Group. Still, the board noted that 40 percent had added personal comments about the hardship an increase would pose.

One board member — Dr. Allan Ramsay — also disagreed with the board's majority and argued in his dissent that the Blue Cross rate increase could have been has low as 4.7 percent. He noted Blue Cross wanted a 9.8 percent increase in 2015 and was granted 7.7 percent.

"I do not believe this large two-year increase is affordable; nor does it align with rising cost increases in other sectors of our economy," Ramsay wrote. "I also do not believe that a smaller rate increase for 2016 than the one now approved by the board will threaten the solvency of the company."

In May, Blue Cross filed for an 8.4 percent average rate increase across all its insurance products, and later revised the request to 8.6 percent. By July, when the board held a hearing on the rates, Blue Cross officials said they could accept a 7.2 percent rate increase.

Blue Cross won't appeal the rate ruling, said Cory Gustafson, its director of government relations. Whether the increase turns out to be sufficient, he said, "Only time will tell."

The board also approved a rate for MVP Health Care that was slightly a lower than the 3 percent increase the company had requested in May. But the 2.4 percent increase was in line with what MVP said it wanted at its July hearing.