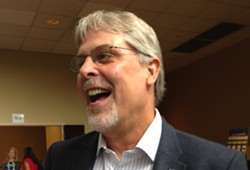 Never give up, work with your team and, if you have a chance, learn to operate an AK-47 before you get kidnapped on the high seas by gun-toting pirates.

That was the lesson from the talk Captain Richard Phillips delivered Thursday to about 1,000 people at the Vermont Captive Insurance Association's annual conference in South Burlington.

While the crowd was assembled to network about the self-insurance market known as "captive," Phillips talked about a very different kind of captivity — the type where Navy SEALs come to the rescue instead of accountants and lawyers.

His message applied to all aspects of life: Don't quit. "Nothing is over until we choose to give up," Phillips said.

Dressed in a blue blazer and button-down shirt, Phillips could almost have passed for one of the many bankers, CPAs, lawyers and insurance gurus gathered at the Sheraton.

His story, though, was more exciting than the patter about reinsurance, asset allocation and risk management.

The merchant marine captain from Underhill was kidnapped by Somali pirates during the attempted hijacking of the Maersk Alabama in 2009, and he was rescued by Navy SEALs from a lifeboat after five days as a hostage. The dramatic story captured international headlines and inspired a movie starring Tom Hanks as Phillips.

Phillips retired from the high seas last year and these days gives talks such as the keynote speech at the insurance conference and autographs copies of his book, A Captain's Duty.

While Phillips has often been called a hero, he said Thursday that he never set out to be one. After four pirates boarded the Alabama and the barricaded crew members were able to take the pirate leader captive, Phillips agreed to get off the ship with the remaining three pirates because he thought it would improve the odds of securing the $30 million ship and his crew. "I didn't surrender myself as some sort of sacrificial, fatted calf," Phillips said.

The pirates were supposed to return Phillips to his crew after they got their leader back, but went back on their word and kept him as they attempted to devise an escape from U.S. Navy forces who responded. "That's another lesson I learned," Phillips explained. "Never trust a pirate."

He survived the ordeal in the lifeboat, which the pirates commandeered because their own skiff had sunk, through a combination of bravery, tenacity and worry. Phillips says he repeatedly thought about how terrible his wife would feel if he died because for this trip she had not gone into the Burlington International Airport airport to see him off, as was their normal routine. She had instead left him at the curb so she could get to her job as an emergency room nurse.

The pirates beat Phillips repeatedly and put him through several mock executions, but in bizarre fashion also talked about taking him to the movies in Somalia. Phillips said he played "mind games" and refused to give up, even though he believed he might die. He wrested an AK-47 from one of the pirates after the man put it down to relieve himself but Phillips found that he did not know how to operate the gun. ("I do now," Phillips said.) Phillips also jumped into the sea and attempted unsuccessfully to swim away from his captives.

Once he was back on board, the pirates were incensed and nearly killed him, but the cooler heads among them realized he was a "human shield" protecting them from the full wrath of the Navy. Bound so tightly his wrists swelled, Phillips again thought he would die. He was rescued by Navy SEAL snipers after they shot three of the pirates.

The broader lesson from his experience is to persist, he told the crowd, as they prepared to board planes, automobiles and vans to head back to their home offices all over the U.S. "When you vow you won't quit," he said, "something will happen to make your situation better."