A Sleek Tech Expansion in South Burlington | Off Message

They sell computers rugged enough to operate in mine shafts. But there's nothing rough about the expanded headquarters of Logic Supply in South Burlington, which celebrated a sleek $4 million makeover Thursday that added 21,000 square feet to the building at 35 Thompson Street.
Politicians, business leaders and friends of the company gathered to toast the business and tour the redesigned facility, where "blah" is definitely not part of the corporate ethic. Think purple rugs, turquoise chairs and orange walls. The company café and event space could pass for a hipster New York City restaurant dining room, and yes, that espresso machine in the corner is for employee use.

Big windows show the green fields next to the building off Hinesburg Road. With a general absence of clutter in the office spaces, the Logic building seems designed to invite clear thinking.

"We're neat and tidy people," joked Lisa Groeneveld, chief operating officer, who founded the company with husband, Roland Groeneveld, and brought it to Vermont in 2004. 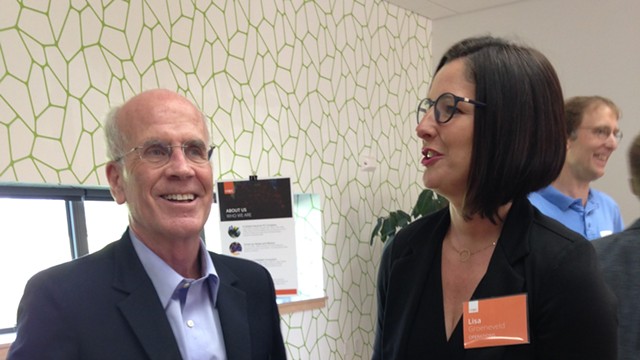 As high-tech jobs at Ello and other startups have migrated out of the Burlington area recently, Logic Supply is expanding. Production rose by 36 percent in 2014 and the company says an employee headcount increased 30 percent in the fourth quarter of 2014. Logic Supply has about 70 employees around the world, most of them in South Burlington.

While Groeneveld's husband hails from Holland, she grew up in Vermont and graduated from Spaulding High School in Barre before heading to Northeastern University in Boston, where she studied marketing and international business.

She didn't anticipate going into business herself.

"It just sort of happened," she said. "You have the idea, you have the ability to carry it off and then a lot of it is luck."

The new building includes office space for sales, marketing and product design, as well as warehouse space and a big room where employees assemble small, rugged, custom-designed computers. They're intended to work on top of windmills, solar arrays and inside food-production facilities, among other spaces. State leaders and tech boosters praised the problem-solving approach epitomized by the company. Vermont House Speaker Shap Smith (D-Morristown) said the company's progress shows "that we have a strong economy for the future."