The Barre mother charged with fatally shooting a Department for Children and Families caseworker — and suspected of killing three of her relatives hours beforehand — pleaded not guilty to a first-degree murder charge Monday.

Jody L. Herring, 40, was "very calm and laughing," after she was arrested Friday afternoon in the shooting of Lara Sobel, who was killed with a hunting rifle fired at close range in downtown Barre, according to Vermont State Police affidavits. Sobel had been involved in a case in which Herring lost custody of her 9-year-old daughter, state officials say.

"During transportation the female continued to laugh and talk about the victim," Vermont State Police Detective Sgt. Hal Hayes wrote in an affidavit. "Prior to placing the female into the cell she was still laughing and making small talk about the incident like it was no big deal."

During the arraignment in Washington Superior Court, prosecutors from the Vermont Attorney General's Office said they will seek a competency evaluation for Herring, whose face betrayed no emotion during the court hearing. Defense attorney David Sleigh said he will likely oppose the competency evaluation, which would determine whether Herring is mentally competent to stand trial. Herring is being held without bail, which Sleigh did not oppose.

After the hearing, Attorney General Bill Sorrell said he hoped by the end of the week police will finish their investigation into the deaths of  Herring's relatives, Regina Herring, 43, Rhonda Herring, 48, and Julie Falzarano, 73, who were found dead in a home in Berlin on Saturday morning. Gov. Peter Shumlin has referred to Herring as the "alleged perpetrator" in those deaths.

Herring allegedly shot Sobel twice in broad daylight as Sobel left her office at the Barre City Place on Main Street, where DCF has an office, shortly before 5 p.m. Several witnesses saw the shooting and its aftermath.

Two eyewitnesses describe hearing the first gunshot, then watching as Herring fired a second shot at Sobel, who was on the ground.

Washington County State's Attorney Scott Williams was in a gym on the first floor of the Barre City Place when he heard shots fired. He rushed outside, saw Sobel on the ground and Herring holding the rifle. Williams wrestled the Remington .270-caliber rifle away from Herring, and, with the help of bystanders, held Herring until police arrived.

Williams stayed with Sobel, who he knew, as she lay dying.

"I was able to verbally comfort Lara Sobel after Jody Herring had been contained," Williams told reporters after the arraignment. "I was able to have my wife go to Lara’s home to be with her girls pending notification."

Because he is a witness, Williams handed off the case to the Vermont Attorney General's Office. He sat in the courtroom gallery for the arraignment.

Herring also called her brother, Dwayne Herring, just minutes before the shooting Friday night. She left him a voicemail.

"If you think anything of your sister you'll get a hold of me now," she said, according to court documents.

She called him back shortly after the shooting.

"Watch the news; you'll wish you got a hold of me earlier," she said.

Herring at one point was shouting about her daughter being taken by DCF, according to police affidavits.

Inside the Barre police station, officers discovered that she was carrying a sleeve of .270-caliber bullets in a plastic bag tucked in her waistband.

At her home in South Barre, police found bullets and a $20.80 receipt from the Berlin Walmart for ammunition. It was dated June 2.

Court records show that Herring was legally prohibited from possessing a firearm. She has 11 misdemeanor convictions, including one for domestic assault, which made her ineligible under federal laws to have the hunting rifle she allegedly used to kill Sobel.

Among those in the packed courtroom Monday was Herring's 20-year-old daughter, Desiree Herring, who said she and her mother had become distant in recent months.

“I’m still in in shock," she said in an interview. "I don’t even know if she knows what she’s done. She had such a blank look on her face [in court] ... If any of us knew she was going to kill someone, we would have stopped her."

Gov. Peter Shumlin spoke with DCF workers in Barre shortly before the arraignment.

"We just met with many of the hard-working employees who were here or were nearby when this tragedy struck on Friday," he told reporters. "All I can tell you is they’re really devastated." 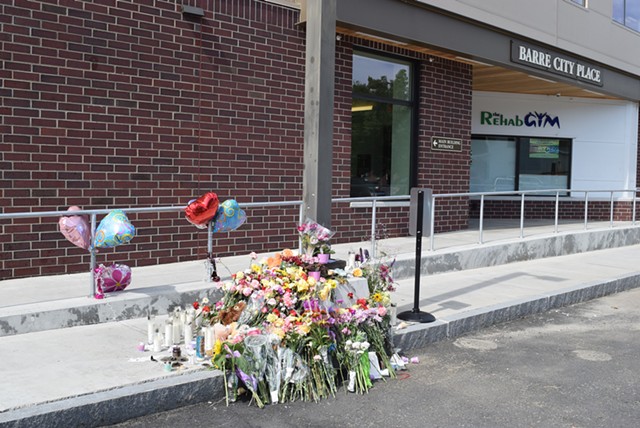