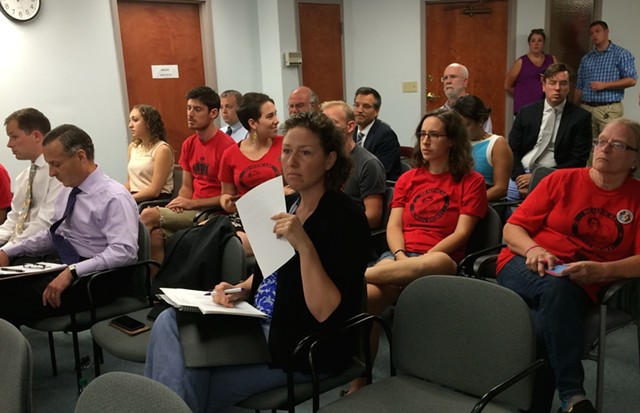 Bekah Mandell of Burlington swayed back and forth to keep her infant sleeping Wednesday as she told the Green Mountain Care board that she and her husband can barely pay their current health insurance premium — $1,395 a month. If the board approves the increase Blue Cross Blue Shield of Vermont requested, they will pay $1,500 a month — "more than we can afford," she said.

Jaime Contois of Putney had a similar story. Also a new mom, she said she and her wife already pay $18,000 a year for health insurance — 22 percent of their combined incomes. "We are looking at not being able to afford insurance as we start a family," Contois told the board. "I ask you to deny the rate increase. It is unethical."

Blue Cross had filed to raise its premiums by an average of 8.4 percent next year, then amended the request to 8.6 percent. By this week's hearing, however, it had agreed with an independent actuarial consultant that it could live with a 7.2 average increase. Blue Cross covers 70,000 people with plans sold through Vermont Health Connect, also called the health exchange.

The board must settle on 2016 rates by August 13. The policies take effect on January 1.

For six hours spread over two days, the Green Mountain Care Board listened to technical testimony on requests from Blue Cross and MVP Healthcare to increase premiums for the policies they will sell next year through Vermont Health Connect. It was in the final half hour of the second day that seven individuals put human faces on the impact of those proposed increases — poignant presentations that likely made the board's decision more difficult.

MVP Healthcare requested a 3 percent increase — although it proposed a 27 percent increase in the premium for its catastrophic plan, available only to individuals under age 30. By this week, it had revised its request to 2.4 percent, lower than the independent actuary had suggested. MVP's health exchange policies cover 6,400 people.

Blue Cross and MVP are the only insurance companies selling medical policies through Vermont Health Connect, the insurance marketplace where individuals and families must buy health insurance if they don't get it at work. It is also the mandated marketplace for small employers, a category that will expand next year to include organizations with up to 100 workers.

The technical debate during the board's hearing on the Blue Cross rate request Wednesday morning focused on how much it should set aside in reserve to cover unexpected increases in claims. Lila Richardson, the lawyer representing the Vermont Office of Health Care Advocate, argued Blue Cross had "overstated the reserve it needs." The insurer wants 2 percent of the premium dollars to go to reserves.

"Reserves are a consumer protection," argued Paul Schultz, chief actuary for Blue Cross. "They allow us to continue to pay claims if there are adverse events." Adverse events could include a flu epidemic that spikes claims or a new expensive drug that becomes popular.

Dr. Allan Ramsay, a board member, questioned Blue Cross about the likelihood of adverse events. "We haven't seen a flu epidemic," he said. And he suggested that Vermont doctors and patients "don't engage quickly in new technology."

In the MVP hearing Tuesday, the health advocate and the board's actuarial consultant recommended a higher increase in premiums than the insurance company. That had some board members scratching their heads.

"If the board agreed to 2.4 percent, does that feel OK to you?" board member Con Hogan asked Jackie Lee, the board's consultant.

Lee replied that MVP picked the lowest rate increase it could because it wants to compete more aggressively with Blue Cross for customers in the Vermont Health Connect market. "I caution against decreasing beyond 2.7 percent," she advised.