For the past 15 years, James Haslam has built the Vermont Workers' Center into a sometimes controversial, but usually hard-to-ignore force for economic justice. Now, he's shifting his focus to politics.

Haslam announced Monday that he's stepping down as the center’s executive director in order to lead a new Vermont-based advocacy group called Rights and Democracy. It's slated to launch on Labor Day.

In his new gig, the 41-year-old Haslam hopes to elect state leaders who support causes the Workers' Center has long championed, such as livable wages, health care reform, affordable housing and environmentalism.

Suffice it to say, Haslam is dissatisfied with what politicians in Montpelier have accomplished on those fronts.

“It’s been really interesting watching [Sen.] Bernie Sanders’ support and contrast that with what’s happening in Montpelier,” he said. “[Gov.] Peter Shumlin got elected sounding a lot like Bernie Sanders. He tried to talk the talk, but he didn’t follow through.”

Rights and Democracy will be funded through contributions, Haslam said. As a 501(c)(4) social welfare organization, it will be free to engage in more lobbying and electoral activities than the 501(c)(3) Workers' Center. 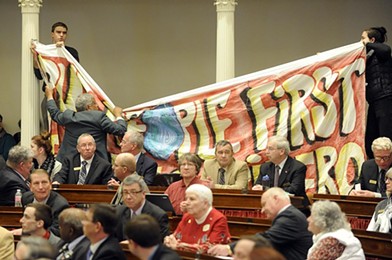 “We have a lot of fundraising to do,” Haslam said.

Initially a Workers' Center volunteer, Haslam became the organization's sole employee and has since built it into a force, with $669,000 in annual revenue and a staff of organizers. The Burlington-based group has advocated for a variety of causes, including universal health care, workers' rights, immigration reform, higher wages and paid sick leave.

In January, Workers' Center volunteers interrupted Shumlin's third inauguration by unfurling banners in the House chamber, singing and chanting, and staging a sit-in. Lawmakers largely criticized the action, and the organization kept a lower profile in the Statehouse in subsequent months.

Three Workers’ Center organizers — Kate Kanelstein, Megan Sheehan, and Matt McGrath — will run the organization as a team on an interim basis while figuring out a leadership plan for the future, Haslam said.