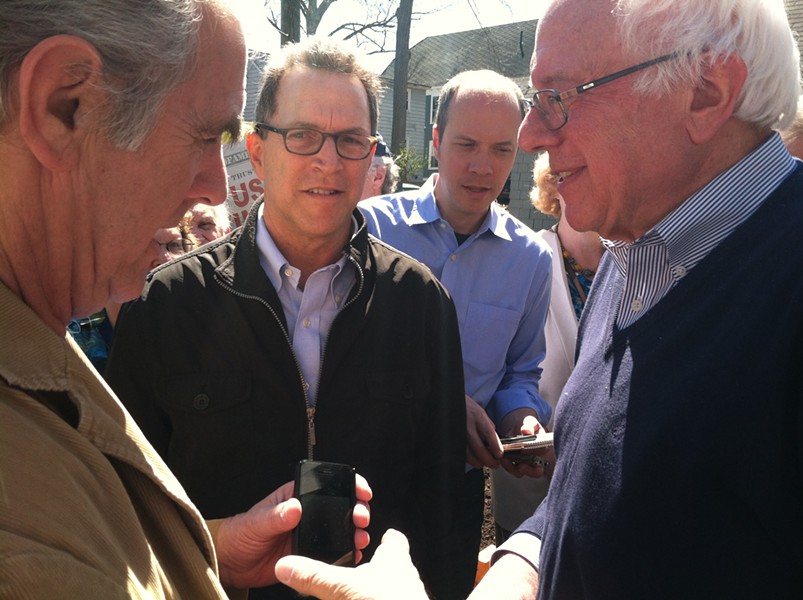 The Vermont independent, who is seeking the Democratic presidential nomination, followed up his statement with an email to campaign supporters. In it, he quoted Elizabeth from Ohio as saying, “I could afford to go back to work if minimum wage was $15. It costs my family less for me to stay home than to pay childcare and transportation costs to work for $9.50/hr.”

Those listening to Sanders and reading his email might readily have concluded that Sanders wants American workers to be getting at least $15 an hour now.

The champion of workers’ rights might be paying better than your average creemee stand, but his campaign staff's starting pay is not a whole lot more than the $10 an hour Walmart pledged to pay its workers starting next year.

Briggs defended Sanders' campaign pay as in line with an executive order President Barack Obama signed last year as the minimum wage for contracted federal workers. Sanders' proposed legislation, Briggs said, does not call for raising the minimum wage to $15 an hour until 2020.

Looking at Sanders' July campaign finance report, it's not easy to discern just how much Sanders pays his employees. The report lists expenditures, including payroll, but Briggs said the salary figures are post-taxes. That makes it difficult to figure out hourly pay.

Sanders lists 33 campaign staff members on his campaign finance report, ranging from top dogs to part-time interns. The July report shows eight staffers receiving $683 twice a month. Briggs said those are $10.10-an-hour interns who regularly come to the office. The campaign also has volunteers, he said.

Interns on Sanders’ Senate office staff are paid $12 an hour, Briggs said. That’s more than some interns make in Congress. A 2013 report in the Atlantic magazine found that only 35 of the 100 senators paid their interns at all.

Beyond the interns on Sanders’ campaign staff, there’s a wide range of pay. Most workers won’t get rich off the job. Campaign manager Jeff Weaver makes the most, earning $4,934 twice monthly.

Briggs, who is Sanders' Senate spokesman and his campaign spokesman, draws half a salary from both roles, and gets his health coverage through his Senate job. Next month, he said, he will shift to one day a week on the Senate staff.

For campaign workers, Sanders appears to be more generous with health coverage than the average U.S. employer. His July campaign-finance report lists expenditures to Blue Cross/Blue Shield of Vermont to cover employee health insurance. All full-time campaign employees are eligible for coverage on the first of the month following their hire date, Briggs said.

Contest: Win $500 to Shop Locally for the Holidays
Top Stories