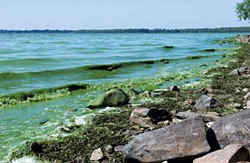 In the middle of a sweltering heat wave, blue-green algae sightings have prompted officials to close two of Burlington's most popular swimming sites.

The Burlington Parks and Recreation Department announced Monday that North Beach and Leddy Beach are unsafe to swim in until further notice. Its staff, along with Vermont Health Department officials, will continue to monitor the algae levels, and post results online.

Blue-green algae — also called cyanobacteria — has become a perennial problem in Lake Champlain. Warm weather and phosphorous pollution contribute to these sometimes-toxic blooms, which are commonly described as resembling thick pea soup. Last Friday, blue-green algae was spotted in two other locations along the Burlington waterfront, near Perkins Pier and the Community Sailing Center.

The Health Department notes this on its website: "There are no documented cases in Vermont of human illness related to blue-green algae; however, caution around the algae is urged." It warns that swimming in water full of blue-green algae can cause skin rashes, and that swallowing it can lead to vomiting, dizziness, numbness and liver damage.

North Beach is the main attraction for a crowded campground nearby. In response to a query about refunds on Facebook, parks and rec director Jesse Bridges sent people in search of beach to Oakledge Park, where people with camping passes will be given free admission.