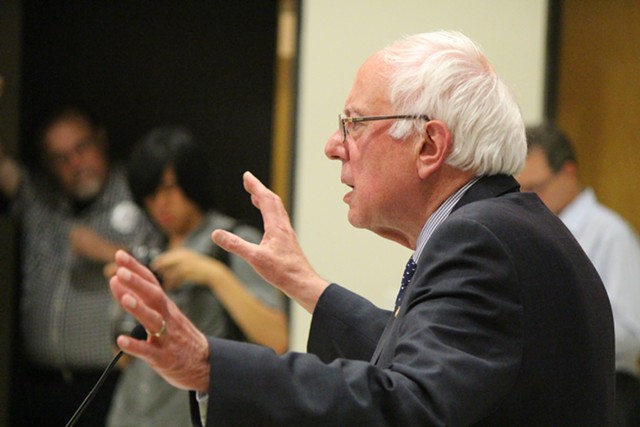 "I don't actually have a question, Mr. Sanders. I just want to thank you from the bottom of my heart," the Morningside College student said. "I'm [from a] third-generation union family. My 1-year-old son's on WIC. My two autistic siblings are on Medicare. And for the first time in my life, I honestly feel a candidate is worthy of my admiration and truly and politically who I am. I just want to thank you for that."

As the audience of more than 400 clapped its approval, Sanders sought to bring his supporters back to Earth.

"When you say that, it is very moving to me, but I have to repeat something. I want to make this clear: Guys, we are in this together. OK? I can't do it alone," he said, invoking the specter of capitalist forces he said were working against him. "These guys are just too powerful. But we can beat them when we stand together."

As Sanders works his way across the Midwest this week, evidence is mounting that a sizable portion of the Democratic electorate is standing with the 73-year-old presidential candidate. After 10,000 people showed up to a rally Wednesday night in Madison, Wis., Quinnipiac University released a poll showing that he'd more than doubled his support in Iowa since May, and trails Democratic frontrunner Hillary Clinton by just 19 percentage points — 52 to 33 percent.

And as he traveled from a 600-person gathering in Rochester, Minn., Thursday morning to the campus of Iowa Central Community College in Fort Dodge that afternoon, Sanders' campaign announced he had raised more $15 million in his first two months as a candidate.

But as in Sioux City, Sanders cautioned a crowd of 150 in an ICCC auditorium not to rest all its hopes and dreams on him.

"I appreciate the Bernie signs, but if you think I can do it alone, you're sorely mistaken," he said. "The truth is that no president of the United States — not Bernie Sanders, not anybody else — can bring about the changes we need to protect the working families and the middle class of this country. That's just the simple reality, and we are naive not to think otherwise. They are very powerful. These guys control the economy and they can punish us at any time they want." A day after his raucous rally in Madison, Sanders flipped the script of the standard town hall meeting in Fort Dodge. Instead of taking questions from residents of the north-central Iowa city of 25,000, he interrogated them.

"The Koch brothers will spend close to $1 billion in this election cycle," he said. "That is more money than either the Democratic Party will spend or the Republican Party will spend. Does that sounds like democracy to you?"

"No," the crowd murmured.

"What are the implications of an extreme right-wing family like the Koch brothers, whose views are that we should abolish Social Security, Medicare, Medicaid, federal aid to education, do away with the concept of the minimum wage, do away with public education, and they are now spending more money than the Democratic or Republican parties?" he asked. "What are the implications of that for our kind of society?

"Yes they do," a woman agreed.

"OK. Other thoughts on it?" Sanders prompted. "Yes, sir."

"It's a non-sustainable concentration of power," another man said. That night in Sioux City — just across the Missouri River from Nebraska and across the Big Sioux River from South Dakota — Sanders faced the inevitable question about the political philosophy to which he's long subscribed.

"I love the fact that you call yourself a democratic socialist," Gary Lewis said. "I wonder as we go forward — trying to explain what we saw here today, why we believe in you — how do we tell the people that [when] they hear the word 'socialist,' how do we tell them that ... it does not mean what they think it means?"

"Based on the size of the crowds that we've been drawing and our increasing poll numbers, I think many people are catching on," Sanders said.

Democratic socialism, he told the crowd, means standing for the middle class and ensuring access to health insurance, paid sick leave and education.

"I believe in equality for all people, and to my mind that's what democratic socialism is about," he said. "Let us not be afraid of a word. Let us look on ways that we can expand the middle class and make life good for all of our people."