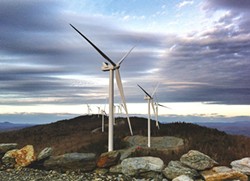 A proposed wind project that could put up to seven turbines on a Swanton ridge has neighbors on edge.

The project, which would be constructed near the Swanton-St. Albans line off Vermont 105, could be nearly twice the size of the Georgia Mountain wind project. It is the first wind project proposed in northwest Vermont since the Georgia turbines began operating in 2012.

Swanton developer Travis Belisle presented his plans at a neighborhood meeting June 20. His goal, he said, is to create locally generated renewable energy. “I’m trying to do the right thing for future generations,” he said. “I’ve got the opportunity to do something good.”

His neighbors, including those in a nine-house development that Belisle built, aren’t so sure seven whirring turbines are the right thing for them.

“It terrifies us,” said Christine Lang, who lives on Rocky Ridge Road in Belisle’s development. She and other residents said they’ve heard about complaints that neighbors of other wind projects have had about noise and flickering shadows.

Lang said Belisle made clear when she and her husband bought the house that he might someday put a wind project or a quarry on the land. But, she said, the emerging details are unnerving.

The project would put turbines within a third of a mile of the neighbors. That’s closer than the half-mile distance between the Georgia Mountain turbines and neighboring homes. Some people near the Georgia turbines have complained that construction disrupted wildlife, and that the turbine noise and flickering shadows are difficult to live with.

Lang said neighbors were told the Swanton turbines could be taller and have longer blades than the four on Georgia Mountain. That, coupled with their closer proximity to homes, is disturbing, she said.

All industrial wind projects built in Vermont in recent years, including those in Georgia, Lowell and Sheffield, have generated opposition from neighbors — making for protracted legal and regulatory battles. In some cases, developers have bought the homes of opponents. In others, the project has lowered neighboring property assessments.

Belisle, who also lives near the proposed project, said he expected resistance, but thinks that with education, people will come around. Belisle declined to say whether he has investors for the project. “I can’t get into that,” he said.

Belisle has hired Martha Staskus, a wind developer with Vermont Environmental Associates in Waterbury, to work on the project. She also developed the Georgia Mountain project.

Belisle said he conducted wind measurements over the last couple of years and determined there is sufficient wind speed. Studies are being conducted on the project’s environmental impacts, including on bat and bear habitats, Staskus said. The next step will be to apply to the Vermont Public Service Board for a permit.

Annette Smith, executive director of Vermonters for a Clean Environment, who has led opposition to large wind projects in Vermont, said she doesn’t believe this project will win approval. While the board green-lighted projects in Georgia, Lowell and Sheffield, she contended that it will be compelled to require tougher noise standards in the future.

She added that the closer proximity to homes will also be a barrier. “Nobody lives closer than about 3,000 feet from a wind turbine that the PSB has allowed to be erected,” she said.