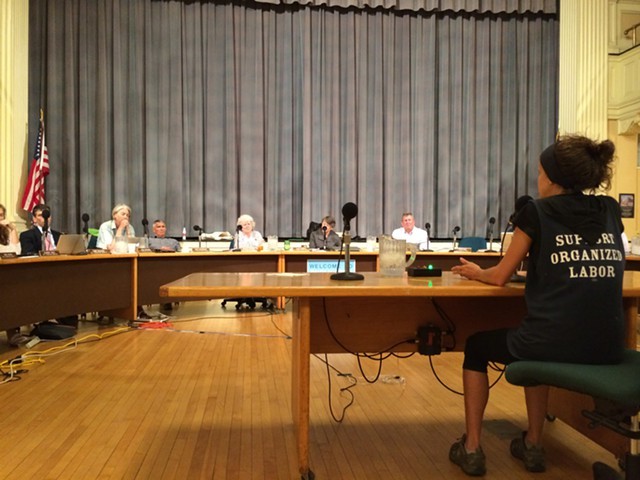 Seven hundred Howard Center workers are getting a raise. Earlier this week, staff represented by AFSCME (the American Federation of State, County and Municipal Employees) signed a two-year contract with management after negotiations that lasted more than a year.

Under the agreement, direct care staff will receive a 2.6 percent increase to their base salaries during the current fiscal year, which applies retroactively, and a 2 percent increase in FY 2016. Some staff will receive additional pay increases or bonuses, depending on licenses they hold, the shifts they work, the length of time they've worked at the center, and other factors.

Gordon Blaquiere, a field services director for AFSCME, served on the bargaining team. Noting that he's been negotiating for 30 years, he described the latest contract for Howard Center workers as one of the top 10 most successful contracts he's worked on.

The Howard Center, a nonprofit that serves people with developmental disabilities, substance abuse and mental health needs, employs roughly 1,500 people, but AFSCME only bargains on behalf of its 702 direct care workers. In a press release announcing the contract, the center noted that 127 of those workers are actual members of the union. (Blaquiere said the union has since signed up roughly 15 additional members.)

As a result of the new contract, the union is dropping a lawsuit it filed against the Howard Center last year, alleging that a 3 percent pay increase it believed workers were entitled to under state law was withheld by management. According to Blaquiere, as part of the agreement, staff who were affected by that lawsuit are receiving an additional 2 percent increase to their base salary and a 1 percent bonus for a nine-month period.

Last spring, staff picketed outside Howard Center offices, decrying what they described as unacceptably low wages. They also showed up several times at Burlington City Hall, urging councilors to weigh in on their behalf. Eventually, by one vote, the council did.

The union will continue to discuss the issues it raised in these settings — including retention rates for staff — through four committees, made up of union members and management.

Howard Center management said little publicly during the negotiations, citing an agreement to refrain from discussing the negotiations. But in a statement released Wednesday, Bob Bick, executive director of the Howard Center, suggested that the nonprofit would need increased financial support from the state in order to "sustain the progress we have made with this contract."

Bick continued: "The State cannot continue to under-fund our services with zero or near-zero increases, accompanied by programmatic cuts, while hospitals and state employees receive consistent and measurable annual increases. It is unrealistic to continue to provide disproportionately inadequate resources and expect that we can attract and retain the staff necessary to meet the very significant programmatic and client services demands we are asked to meet.”

The contract will expire next June, which means both sides will need to return to the bargaining table this winter. In the meantime, AFSCME hopes to expand its reach among Howard Center staff. Under the new agreement, union representatives are authorized to meet with each new employee for an hour to encourage the individual to sign up for a union membership, a practice that Blaquiere thinks will boost the ranks.