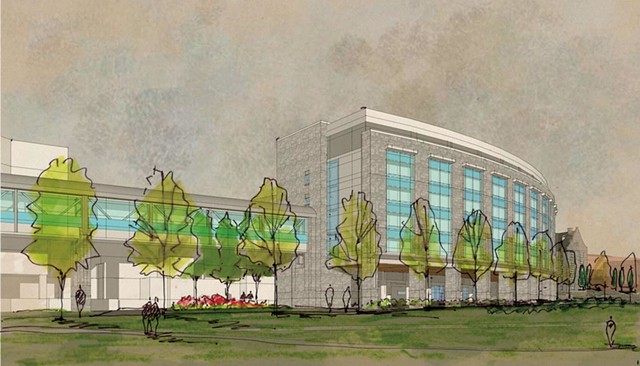 The Green Mountain Care Board will allow the University of Vermont Medical Center in Burlington to proceed with a seven-story patient tower — but only if the hospital complies with conditions that will delay construction for more than a year.

“It was better to know more and take more time than to know less and move faster,” said Al Gobeille, board chairman, referring to conditions the board attached to the certificate of need.

Hospital officials had hoped to start construction earlier this spring and open the tower with its 128 single-occupancy rooms in the fall of 2018. Now construction is unlikely to begin until late next year or early in 2017. The new tower is only one aspect of the medical center's ambitious plans to expand.

The conditions the board imposed reflect worries about the financial risks of the $187 million project. “The applicant can sustain the financial burden likely to result from completion of the project,” the board order states, but notes, “We find that the financial margin for error is narrow.” The board cites risks such as whether the hospital can raise $30 million in donations for the project and hit other revenue and expense targets to avoid the need to increase costs for patients.

The board split over the project, with four of five members endorsing it. Board member Allan Ramsay objected to several conditions that delay construction. Con Hogan, the fifth board member, said the panel should deny the certificate of need for the project.

John Brumsted, CEO of UVM Medical Center, welcomed the board’s approval, adding the panel acknowledged the safety benefits of increasing the proportion of single rooms at the hospital from 30 percent to 85 percent. The medical center now must figure out how to meet the board’s conditions, he said. The hospital could request relief from a condition by notifying the board before July 15. It also could appeal the decision to the Vermont Supreme Court. It must decide whether to appeal by the end of July.

The Vermont Federation of Nurses and Health Professionals and the Health Care Advocate both agreed on the benefits of replacing double-occupancy rooms with single-patient rooms, but expressed concern about the expense. The union sought assurances that the hospital wouldn’t cut corners on staffing to find savings for the project. The Health Care Advocate questioned the hospital’s ability to find efficiencies without affecting patient care and predicted the projected $16 million increased cost to operate the new tower would end up passed on to patients.

Previously, in a May 28 letter to the board, hospital officials restated their promise that the project wouldn’t increase insurance rates or charges. The also said it would not lead to staff cuts that affect patient care.

The advocate’s office has the right to appeal the decision, but Kaili Kuiper, staff attorney, said late Wednesday, “We aren’t anticipating appealing.” She added, “We are pleased the board is keeping an eye on the possibility the project could increase rates and has imposed conditions.”

The hospital first told the board in March of 2013 about its intention to replace many of the double-rooms for patients in older structures. Single-occupancy rooms are now the standard of care because they reduce the spread of infections and medication errors. The project would maintain the total number of staffed beds at the current level: 447.

The tower would be located atop the entry to the emergency department. The first level would be open and on stilts to accommodate ambulances. Four floors would house patient rooms, 32 singles per floor. Two levels of mechanical equipment would cap the tower.

In the July 1 order, all five board members agreed the hospital could proceed immediately to spend $9.7 million to buy an acre of land from the University of Vermont. The parcel is needed to add the tower to the western side of the medical center campus.

A majority also said the hospital could spend money to develop construction plans, so it can provide the board with a more accurate estimate of the cost. The board said the new estimate had to be within 8 percent of the previous estimate.

The restrictions in the order require the medical center to:
• Prove during the next budget year that it can operate within specified limits on growth in expenses and revenues.
• Develop a budget proposal for the following year that continues to hit expense and revenue targets.
• Increase the amount of cash on hand.
• Collect at least $20 million in pledges before construction begins.
• Present a new financing plan that pays off 30 percent of the debt within 20 years instead of paying only interest until 2038.

Board member Ramsay called the first budget condition a needless delay because it means construction must wait until the end of the next fiscal year — September 30, 2016. He said the medical center already was on track to increase its cash on hand. He also argued that none of the consultants who analyzed the project identified the hospital’s debt repayment plan as “imprudent.”

Hogan criticized the board’s conditions as inappropriate micromanagement to remedy the deficiencies of the application. Better to reject the application, he said, and let the hospital come back in two years with a better plan.