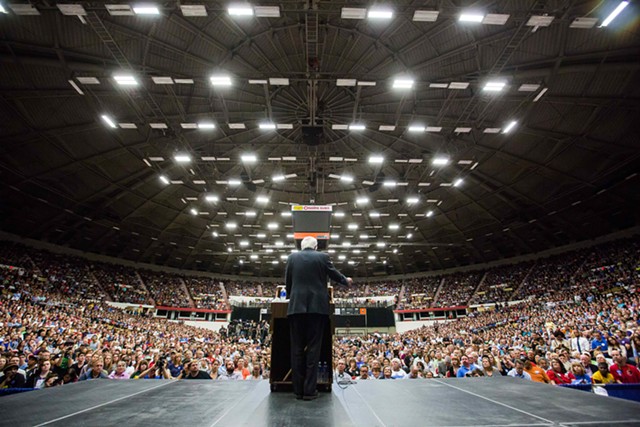 Nearly every last one of the 10,000 seats in Madison’s Veterans Memorial Coliseum was spoken for Wednesday night when Sen. Bernie Sanders (I-Vt.) took the stage.

“In case you haven’t noticed, there are a lot of people here,” he said.

On the day his chief rival for the Democratic presidential nomination, former secretary of state Hillary Clinton, broke an early-campaign fundraising record, Sanders broke one of his own.

Those people were definitely feeling the Bern.

Waving blue and white placards bearing the Vermont senator’s name, the crowd interrupted him frequently to cheer his calls for “a political revolution” and to boo his references to “the billionaire class,” the Koch brothers and Wisconsin’s own Gov. Scott Walker, a Republican candidate for president.

In advance of Sanders’ arrival to the Badger State, the Wisconsin Republican Party covered billboards around the state with a parody advertisement of the 1994 movie, “Dumb and Dumber.” On the billboards, Clinton and Sanders were pictured riding a moped together, next to the caption, “Left and Lefter: Yesterday’s Candidates — Extreme Policies.”

Sanders responded in kind Wednesday night, telling his audience that the billboards “indicated that I was an extremist.”

“So let me just say a few words to my friends in the Republican Party about extremism,” he said, his voice rising. “When you deny the right of workers to come together in collective bargaining, that’s extremism!” On the contrary, he argued, the views held by those who filled the arena Wednesday night were shared by “the vast majority of the American people.”

“We believe that the time has come when people in Wisconsin, Vermont and all over this country create a political movement which says to the billionaires, ‘You can’t have it all!’” Sanders shouted. “And what we are saying to the Koch brothers, Gov. Walker and all of those people is that this great country and our government belong to all of the people and not just a handful of the very wealthy people.”

Wednesday’s record-breaking rally followed similar recent events in the equally progressive enclaves of Minneapolis and Denver, which drew 3,000 and 5,000 people, respectively. As Politico’s Jonathan Topaz observed, Sanders has adopted the time-tested strategy of courting major crowds in liberal bastions in order to solidify his status as Clinton’s chief rival.

Sanders is hardly a stranger to Wisconsin. He has appeared frequently over the past 13 years at the Fighting Bob Fest, an annual progressive gathering in nearby Baraboo. At Wednesday’s event, disability rights organizer Jason Beloungy said he first saw Sanders speak at the festival a dozen years ago.

“I thought, man, that would be really cool to see someone like that run for president,” he said. “And here we are today.” Cheryl Pieper and Joan Borzym, who work together at an Illinois elementary school, said they drove two and a half hours to hear Sanders speak — and they weren’t disappointed.

“He was everything I thought he was going to be — and more,” Pieper said. “He’s a champion for us — the middle class.”

Both said they were confident Sanders could win the presidency.

“The roar of the crowd tonight—” Pieper said, before her friend interrupted her.

“He can definitely win,” Borzym said.

Sanders — and much of his audience — seemed to agree.

“Now in terms of this campaign, I am more than aware that my opponents will be able to outspend us,” he said. “They have billionaire backers, they have super PACs, they have a lot of billionaire friends. But we are going to win this election, bec—”

Before he could finish his sentence, the crowd's cheers drowned out Sanders’ voice. Twenty second later, he picked up where he left off.

“We are going to win this election because if we do our job well — if we develop the grassroots national movement that I know we can — at the end of the day, they may have the money,” he said. “But we have the people, and when the people stand together, we can win.”

Seven Days is following Sanders from Wisconsin to Iowa, where he’s scheduled to campaign from Thursday through Saturday. Visit BernieBeat.com for the latest.