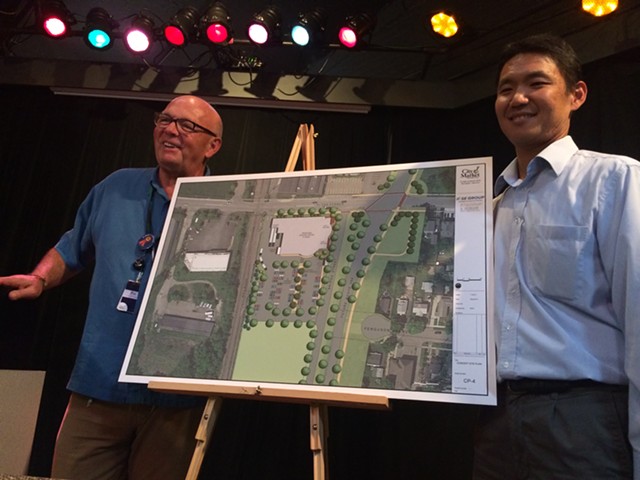 After three years of searching, City Market/Onion River Co-op has finally found a spot for a second store. The Burlington co-op announced Tuesday that it bought a property in the city's South End — at the corner of Flynn Avenue and Briggs Street — from Vermont Rail System.

City Market has been thriving at its downtown location. It boasts more than 11,000 members and has nearly $40 million in annual sales. Outgoing general manager Pat Burns joked that market officials decided it was time to open a second store when residents formed a Facebook page to commiserate about the downtown grocery store's infamously crowded and chaotic parking lot.

Tuesday marked Burns' last day on the job. His successor, John Tashiro, told the crowd assembled at ArtsRiot for the announcement that, "There's a bit of a buzz in the air." He hopes the store will be ready for customers by spring of 2017.

But Tashiro also noted that significant work remains, including an environmental assessment.

Another hurdle: Current zoning doesn't allow for a grocery store on that site. But Mayor Miro Weinberger was on hand to pledge his support, noting that the proposed store seemed like "exactly what many people in the South End are looking for."

The proposed two-story store would have 21,000 square feet of space — more than the 16,000 square feet at its downtown location. Burns also made a point of mentioning that it would have more parking — roughly 100 spaces. The currently location has about 70 spaces.

City Market purchased the land for $2 million. It currently hosts several buildings, including a salt storage shed and Upstairs Antiques. The Champlain Parkway — assuming the Weinberger administration fulfills its pledge to construct it — would run right by the new store.

Previously, City Market had been eyeing a city-owned plot on Sears Lane. But Burns said that several lawsuits involving the land made it untenable. Burlington's community and economic development office (CEDO) had been advocating for a mixed-use building with housing on upper stories. Burns did not rule out the possibility of putting housing on the site, but said they are not considering putting any units above the store itself.