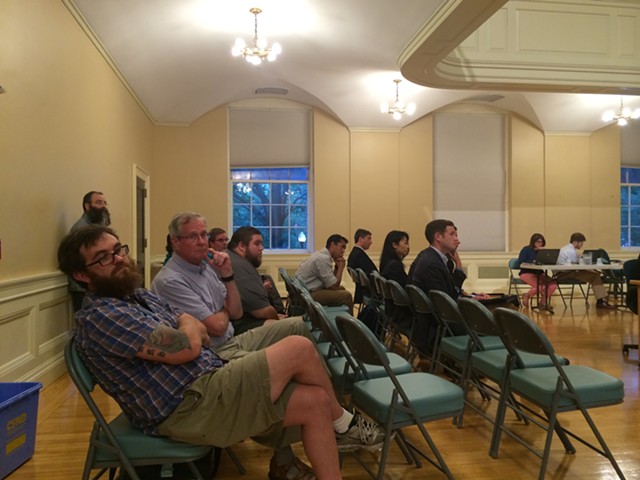 But their decision, vigorously opposed by local cab drivers and debated at length, does not mark the end of the discussion about the hugely successful — and controversial — ride-hailing company.

Uber, which connects drivers with passengers through an app, came to the Queen City last October. In the city attorney's view, it has been operating illegally until now. But from the beginning, Mayor Miro Weinberger, citing the "undersupply" of ride options during peak hours, has said he wanted to find a way to bring the company within the law.

The temporary operating agreement approved last night was his administration's first stab at doing so. The four Progressive councilors voted against it. It's viewed by both sides as a stopgap solution until the council can rewrite the city taxi ordinance to address technology-based companies like Uber.

Under the agreement, Uber must follow some, but not all, of the regulations that apply to traditional taxis. For example, Uber drivers don't have to use the standard meter rates that taxi drivers must charge, but they are required to hold the same level of insurance on their cars and pass equally rigorous background checks.

City council president Jane Knodell, a Progressive, took the rare step of passing her gavel to another councilor in order to enter the debate. "We are creating an economic disadvantage for the regulated taxis and to me that does not meet the basic test of fairness," she said. Recalling Uber's track record of disregarding the law, councilor Max Tracy told his colleagues to consider "how this shiny new technology levels with our values as a community."

Joan Shannon, a Democrat, argued that they didn't have a better alternative, given that the city has "limited enforcement ability" to crack down on Uber.

Councilors also questioned the $5,000 payment that Uber will give the city as part of the deal — Republican Councilor Kurt Wright called it a "pittance" for the multi-billion dollar company. And they expressed concern about Uber's refusal to share information. While the city has a registry of all licensed taxi drivers, it doesn't even know how many Uber drivers operate in the city, let alone who they are. Uber maintains that this is proprietary information.

The council has asked its ordinance committee to come up with a proposal to revamp the taxi ordinance by early November. They also added language to the agreement requiring that Uber follow Vermont labor law — something that a coalition of local unions pushed for.