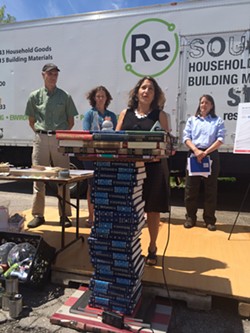 Deb Markowitz was standing amid beer cans in milk crates and piles of scrap wood Thursday afternoon. A towering stack of repurposed encyclopedias served as her podium. The secretary of the Vermont Agency of Natural Resources was holding a press conference outside the ReSOURCE Building Material Store in Burlington to discuss what she called the “maybe not-so-sexy issue of waste.”

Unsexy as the announcement was, it affects all Vermonters. Several years ago, the legislature passed Act 148 to step up the state’s recycling and composting efforts. Despite Vermont's green rep, Markowitz said the state's efforts have plateaued during the last decade. The law has phased-in requirements, and a number of the new changes take effect on July 1. (Depending on where you live, based on local practices, they may be nothing new.)

Here are seven things you should know about the new rules: