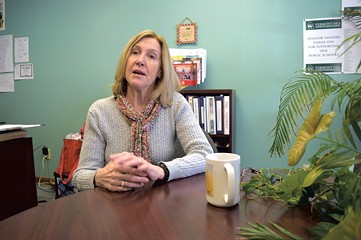 For the president of Vermont's largest labor union, the question of whether to endorse Sen. Bernie Sanders (I-Vt.) in his run for the presidency was "a no-brainer."

"He's a favorite son," says Martha Allen, a Canaan librarian who heads the Vermont-National Education Association. "And he's just right on all the issues."

The Vermont-NEA, which represents some 12,000 current and retired teachers, became the first union in the country Wednesday to endorse Sanders. Earlier this month, the South Carolina AFL-CIO's executive board passed a resolution supporting his candidacy, but its broader membership has yet to issue a formal endorsement.

While Vermont teachers may not make or break a national election, Allen promises to turn the Vermont-NEA's support into action — particularly in neighboring New Hampshire.

"We'll see what they need, where they need boots on the ground and send [our members] that way," she says.

The endorsement should generate at least some votes in the first-in-the-nation primary state: According to Vermont-NEA spokesman Darren Allen, 350 of the union's members actually live in New Hampshire.

Martha Allen says she hopes to persuade her colleagues in other states to follow suit. Next week, she'll join a 15-member Vermont delegation in Orlando for the NEA Annual Meeting and Representative Assembly.

"We're going to wear our Bernie T-shirts one day and say, 'A lot of you don't know him, but you should get to know this guy,'" she says.