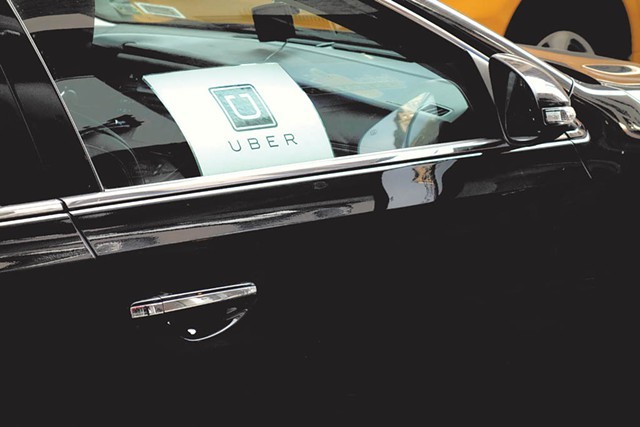 Until now, most of the people raising concerns about Uber in Burlington have been traditional cab drivers who fear their business is threatened by the behemoth ride-hailing company. But another group has joined the chorus.

Working Vermont, a coalition of labor unions, is calling on the city to require that Uber treat its drivers as employees — instead of as independent contractors — in the temporary operating agreement it’s hashing out with the company. That would mean Uber would pay unemployment insurance and workers' compensation for its drivers.

Late last week, Necrason Group lobbyists David Mickenberg and Rebecca Ramos sent a letter on behalf of Working Vermont to Mayor Miro Weinberger, asking him to hold Uber to this requirement before signing off on an agreement. (Two city council committees are reviewing the agreement, which has not yet been finalized.)

Their demand came just ahead of a ruling by the California labor commissioner that holds that an Uber driver was an employee, not a contractor. Uber, which contends that its drivers are the latter, is appealing the ruling. It's facing a number of legal challenges, but it has prevailed in several similar cases in other states.

The distinction between a contractor and an employee, which varies by state, can be hard to pinpoint, but it depends on the level of control a company exerts on the people who work for it.

As Seven Days reported in April, Vermont’s Department of Labor has for months been examining whether Uber drivers are employees under state law. “We are still looking into it,” confirmed Commissioner of Labor Annie Noonan on Thursday, adding, “We’re obviously very interested in what’s happening in these other jurisdictions.”

Among the factors the Vermont DOL is looking at: how Uber vets its drivers, a process that includes background checks, and its termination policies.

Determining whether a worker is an employee falls within the state's purview, but Working Vermont is hoping Burlington will take advantage of any leverage it has during its negotiations.  Weinberger could not be reached for comment.

Mickenberg said the letter wasn’t prompted by complaints from local Uber drivers. He said there is an opportunity to embrace new technology "in way that is responsible, which acknowledges traditions of Vermont and the value we place on protections for workers."

In an email, an Uber spokesperson maintained: “Drivers who partner with us are properly classified as independent contractors and therefore, we are in compliance with the law.”