At least four Vermont state senators are considering running for lieutenant governor next year, including the chamber's Democratic and Republican leaders — and one of its longest-serving members.

While the next election is more than 16 months away, early jockeying began in earnest last week when Democratic Gov. Peter Shumlin announced he won't seek a fourth term. That's prompted many to speculate that Republican Lt. Gov. Phil Scott is even more likely to leave his post to seek the state's top office.

Senate President Pro Tem John Campbell (D-Windsor), a close ally of Scott's, says such a vacancy may well lure him into his first statewide race.

"Depending on what [Scott] does, the lieutenant governor's office is one I certainly would be interested in," says the Quechee lawyer and Windsor County deputy state's attorney. 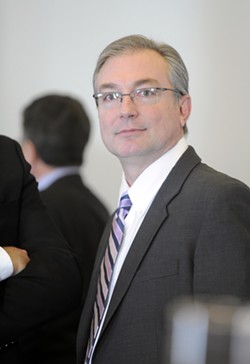 Campbell's own No. 2, Majority Leader Phil Baruth (D-Chittenden), says he, too, is seriously considering a run.

"The revolution at the top has me thinking about this now in a more real-world way," he says.

The Burlington novelist and University of Vermont English professor says the lieutenant governor plays a "crucial role" in presiding over the Senate and serving as an "honest broker."

"I think anyone will tell you Phil Scott has filled that role and done it very well. That's the focus I could bring to it if I decided to run," Baruth says. "As majority leader for the last three years, I've directed traffic on the Senate floor. I've presided over the Senate. It's a complicated thing and not something everybody can get right." 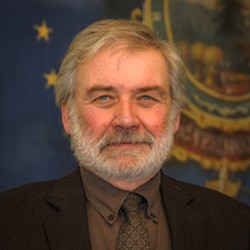 One potential candidate who knows a thing or two about the institution is Sen. Dick McCormack (D-Windsor), a retired teacher and folk singer from Bethel who was appointed to the Senate in 1989.

"There's a part of me that would really like to be lieutenant governor," he says.

McCormack calls the office a "strange" one, because its occupant must be "someone who is qualified to be governor but who is doing considerably less than that." He says he would enjoy the ceremonial obligations — "I love the idea of giving awards to middle school kids" — and would use the office as "a bully pulpit."

"The other thing is, I really love the Senate and I love the orderliness of debate. I think we've lost that in recent years," he says, pausing. "I think I'm talking myself into this."

On the Republican side of the aisle, Scott's potential successors appear to be waiting for him to make up his mind before they discuss their own ambitions. But one likely prospect is Sen. Joe Benning (R-Caledonia), who serves as minority leader of the nine-member GOP caucus.

"I have been asked by several people — and I'm not going to say no," the Lyndonville trial attorney says. "I'm going to say, 'I'm considering,' but it's a big step, and I want to see what the lay of the land is before I get any further involved in that conversation."

Of course, incumbent senators aren't the only ones eyeing the race.

Secretary of Transportation Sue Minter, a former Democratic legislator from Waterbury, says she's "considering all options" for 2016. That could mean a run for governor, lieutenant governor or the U.S. House, if Congressman Peter Welch (D-Vt.) runs for governor. Others named as potential gubernatorial candidates might also take a look at the LG contest if Welch big-foots them out of the gubernatorial race.

One little-known candidate has already filed paperwork with the secretary of state's office to open a campaign bank account and has launched a website declaring he "is running for Lt. Governor."

Brandon Riker, a 28-year-old Marlboro resident who works in finance, cautions that he's still just "exploring the idea" of running and is busy "traveling the state, talking to people, seeing if it's viable."

Though Riker has never run for public office before, he worked for President Barack Obama's 2008 campaign and for Sen. Jon Tester's (D-Mont.) and former Alaska senator Mark Begich's reelection races. He says Scott's decision will not influence his own.

"Where I'm from in Marlboro, we don't have reliable access to the internet," he says. "We just can't bring jobs to the state if that's the kind of infrastructure we have. And out lieutenant governor hasn't been active in pushing policy. It's time that position is treated like a full-time job by someone with a vision for the state."