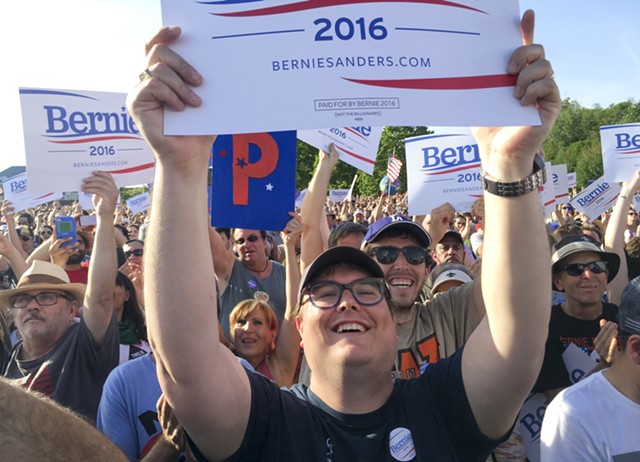 Two polls out of New Hampshire this week have prompted the pundit class to acknowledge the excitement surrounding Sen. Bernie Sanders' (I-Vt.) quest for the Democratic nomination.

On Sunday, Morning Consult released the results of a phone and web survey showing Sanders trailing former secretary of state Hillary Clinton by just 12 percentage points — 44 percent to 32 percent. On Tuesday, a more reliable landline and cellphone poll of Granite State voters conducted by Suffolk University showed a marginally tighter spread of 41 percent for Clinton to 31 percent for Sanders.

That's a dramatic shift from the last round of New Hampshire polls conducted a month ago, which mostly showed Sanders in the low- to mid-double digits.

“Don’t underestimate the power of the progressive nerve network,” said Suffolk University Political Research Center director David Paleologos. “It is alive, far reaching, and it is translating into political muscle in the New Hampshire Democratic primary.”

But Sanders has been drawing large crowds in both states. More than 700 people showed up to a rally in Des Moines last Friday, according to media reports. On Tuesday, the campaign announced it had shifted the location of a planned rally this weekend in Charleston, S.C., to accommodate the more than 1,000 people who had already RSVPed.

“The response in South Carolina has been tremendous,” field director Phil Fiermonte said in a statement.

And as Vermont Public Radio reported Tuesday, Sanders has raised more than $6 million so far, with the average contribution totaling less than $50. Campaign consultant Tad Devine has repeatedly said his boss hopes to raise $50 million to sustain his primary election campaign.

Not everyone is hyperventilating about Bernie.

Fivethirtyeight.com's Harry Enten, who wrote in April that Sanders "is almost certainly not going to be the Democratic nominee for president in 2016," is sticking to his guns. After the release of the latest Suffolk University and Morning Consult polls, he wrote, "If Sen. Bernie Sanders of Vermont wins the Democratic nomination, then everything we know about presidential primaries can be thrown out the window."

Enten's argument? Of the top five primary season frontrunners in modern polling history, all but eventual 2000 Democratic nominee Al Gore lost either the Iowa caucus or the New Hampshire primary. All five went on to win their party's nomination.

"[I]t’s important to keep in mind that even presidential steamrollers hit speed bumps and even — gasp! — lose states," he argued.

So how big a speed bump will Sanders turn out to be?