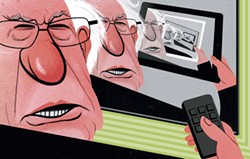 As he continues to beef up his presidential campaign staff, Sen. Bernie Sanders (I-Vt.) has recruited MSNBC producer and 2009 University of Vermont graduate Arianna Jones to join his press team.

According to TVNewser, Jones will serve as "deputy communications manager" for the campaign. She'll presumably work under Sanders' longtime flack, Michael Briggs, who has been splitting his time between the candidate's Senate and campaign offices.

Jones has worked for MSNBC since 2011, most recently as a producer for "The Ed Show," which is hosted by one of Sanders' biggest media cheerleaders: Ed Schultz. Based on her social media posts, it appears Jones accompanied Schultz to Burlington for Sanders' campaign kickoff last month.

The Sanders campaign did not respond to a request for comment.