More than 100 people packed a presentation at Arts Riot about the draft PlanBTV South End, and many panned it. The zoning changes envisioned in the plan could lead to gentrification and displace artists and makers who have turned the neighborhood into Burlington's own version of SoHo, many speakers proclaimed.


Burlington should not try and solve its affordable housing problem with zoning changes that could trigger rent hikes in commercial-industrial space and push artists and small businesses out, said Amey Radcliffe, co-owner of Gotham City Graphics. "We want to keep jobs strong here," Radcliffe said.

The city should instead beef up its affordable housing regulations so new units built in other parts of Burlington are not overpriced. "We don't need any more luxury condos," Radcliffe said.

Maggie Standley agreed. The current zoning is fine, the artist said. "We're a maker community. Allowing housing into the
Enterprise district is problematic." 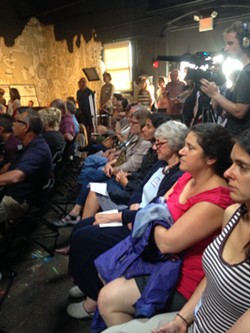 Carrying signs that read "We've got this, keep the protective industrial zone" and "gentrification = disintegration of arts and industry," many people questioned the proposals in the draft PlanBTV South End and the process that led to them. Several speakers said the thick draft misrepresented public input gathered at meetings and understated opposition to zoning that would allow housing in the Enterprise Zone where it is now prohibited. Some called it a plan driven by city officials and the local "real estate industrial complex" rather than the people.

Burlington planning and zoning director David White responded patiently to the many criticisms. He said infill housing could be carefully done in the neighborhood to meet a range of needs, including "the missing middle" — people who earn too much to qualify for subsidized housing but can't afford market rate apartments or homes. He emphasized that the plan is still a draft, with more public input to be gathered before it goes to the city council for final approval or rejection.

White also stressed that gentrification is happening without any zoning changes in the area, and disagreed that allowing housing would be the death of the arts district. "I don't think we agree that it spells doom,'' White said.

One speaker asked people to raise their hands if they supported zoning for new housing. A few hands went up, while arms filled the air when people were asked if they wanted to maintain current rules that prohibit new housing in the Enterprise Zone.

But some said the turnout was not reflective of  Burlington's full population, and that the show of hands was not a good measure of the proposal's merit.

"I don't think this room is representative," said Dawn Moscowitz, a community organizer.  The need for housing is acute and families are increasingly priced out of the South End, she said. It's important that the process give voice to people who "are living on the margins and don't have the opportunity to come to forums like this" Moscowitz said.


The discussion also veered off to criticism of the proposed Champlain Parkway, a long-discussed road that would help carry traffic from Interstate 89 to Pine Street and downtown.

The draft planBTV South End assumes the road, which has the support of Mayor Miro Weinberger, will be built. Several speakers said the proposal is outdated and will only increase congestion in the neighborhood. Don't build it, said Amy Rubin. "This is '60s thinking. This is 20th century thinking. We have to stop accommodating cars."