Over Objections, Burlington School Board Approves Principal Hire | Off Message 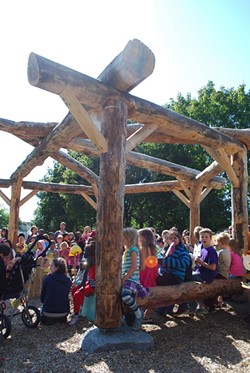 The Burlington School Board on Tuesday approved the hiring of a new principal at one of the city's two magnet schools. The decision came over the objections of about a dozen parents who attended Tuesday night's board meeting at City Hall.

With little discussion, the board voted to hire Lashawn Whitmore-Sells to serve as principal of the Sustainability Academy at Lawrence Barnes, a prekindergarten through fifth-grade school on North Street.

Parents called the decision hasty and the process rushed, especially following the sudden departure of the school's former principal, Brian Williams. He abruptly left his job in March. Parents were initially told he was on medical leave but nothing more. It has since been made public that Williams has resigned and will return to teaching English at Burlington High School, which he did earlier in his career.

Numerous parents asked the board Tuesday to hire an interim principal and conduct a national search for a leader who could demonstrate understanding of and experience with the school's driving principles around environmentalism and service learning.

"It's sort of our last desperate plea" to be heard, said Erika Lowe, a teacher in the district and a mother who said she is moving her daughter out of the Sustainability Academy.

Mark Cline Lucey is among the parents who volunteered to take part in the hiring process for the new principal. He told the board it was nothing but a "dog and pony show'' and a waste of precious time that could have been spent with his three sons.

Dave Davidson, a parent and former school board member, said the way Williams simply disappeared from the school with little explanation in a "here today, gone tomorrow" fashion was difficult for the school community. Williams gave years of love and "endless enthusiasm" to the school, and his departure was handled badly, Davidson said.

He and others said the search to replace Williams was rushed and inadequate. Davidson said it is unfortunate that the controversy about the process puts Whitmore-Sells in a difficult position.

"It's awful this contentious debate involves such a good person," Davidson said.

Burlington Schools Interim Superintendent Howard Smith spoke briefly about the hiring process in response to parents' concerns. But he said he wasn't going to "get into a debate" about his decision to recommend Whitmore-Sells, currently an assistant principal at Camel's Hump Middle School. She was not at the meeting and did not return a message earlier Tuesday seeking comment.

The job was posted from April 7 to 26, a 19-day window that many parents criticized as much too short. Smith said in addition to advertising on School Spring, an education employment website, and the national publication Education Week, the opening was promoted at job fairs in Pittsburgh, Penn., and Albany, N.Y. A pool of five candidates was eventually whittled down to three finalists who met with staff, faculty and parents. Whitmore-Sells was ultimately recommended to the board.

"I can just say with confidence that we have arrived at a candidate that fully meets the qualifications to be the principal at Sustainability Academy," Smith said.

Parents circulated an online petition Monday calling for an interim principal and national search. It had attracted over 100 signatures by Tuesday night, organizers said.

Parents expressed deep frustration with the board's decision Tuesday night. Some said it was symptomatic of larger problems. "The school district is in desperate need of leadership," said AJ Rossman, an SA parent. To spend just 19 days on a search for a school executive is "appalling" and sets the new principal up for failure, he said.

The poorly-designed hiring process, coming after the school lost Williams, is a double blow, he added. No one knew why Williams left, Rossman said. "It was hush hush. We had no idea, whether he was alright, or something horrible happened."

The district needs to do a better job communicating with parents, he suggested. "It's just bizarre to me the level of non-transparency that's happened since March," Rossman said.

Williams says he is ill but getting better and excited to return to teaching. He made the comments in an email message to Seven Days Tuesday morning. He also praised the teachers, staff and parents at SA.

Whitmore-Sells has worked as a teacher and administrator in the Burlington School District. Last year she was interim assistant principal at Hunt Middle School but was passed over for the permanent job. That upset some teachers at the school, who praised her qualifications. They also noted that the hiring of Whitmore-Sells, who is black, would help reach district goals to hire more teachers and administrators of color.

For years parents and students have expressed frustration with the lopsided statistics, but progress toward hiring goals has been slow, with a few exceptions. Burlington's first black superintendent, Yaw Obeng, is set to start on the job later this year, for example, and drew strong support in the hiring process from a range of stakeholders, including school board members, parents, teachers and students.

Parents at Tuesday night's meeting had differing views about the role of race in hiring when asked by a reporter after the meeting.

Tiffany Tillman, vice president of the Sustainability Academy PTO and one of the petition organizers, said she strongly supports efforts for a more diverse leadership in the schools, but it should not be the primary factor in hiring. The controversy at SA is about the hiring process, not diversity, she said. "We are not making this about race."

Another parent, Scott Moody, said the "race card that keeps getting brought up is baloney." Discrimination takes multiple forms and is not just about race, he said. He said he was weary of hearing about race and white privilege in the district.