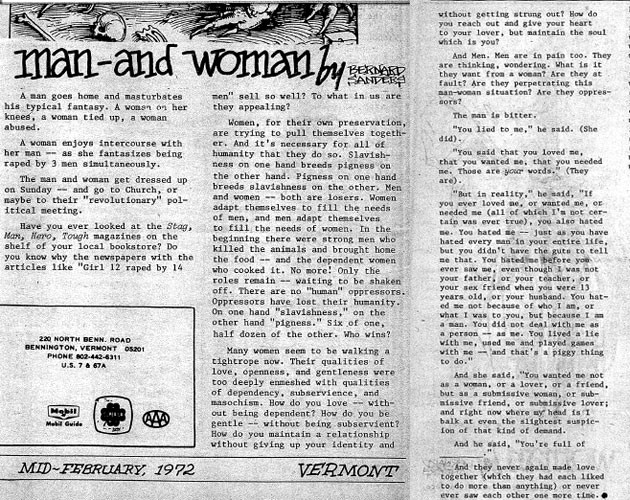 A month after he lost a January 1972 special election for U.S. Senate, once and future candidate Bernie Sanders penned an unusual piece in the Vermont Freeman. Titled "man-and woman," it features dark descriptions of rape fantasy, digressions on gender in society and dialogue between an uncoupling couple.

"A man goes home and masturbates his typical fantasy. A woman on her knees, a woman tied up, a woman abused," Sanders begins. "A woman enjoys intercourse with her man — as she fantasizes being raped by 3 men simultaneously. The man and woman get dressed up on Sunday — and go to Church, or maybe to their 'revolutionary' political meeting."

The long-forgotten piece found a new audience this week after Mother Jones unearthed it as part of a Sanders profile it published Tuesday, just before the two-term senator formally kicked off his campaign for the Democratic presidential nomination.

Mainstream news organizations such as CNN, Slate and The Hill quoted liberally from it, mostly without characterizing its contents. Vox called it "bizarre." Several conservative organs touted its coverage — or lack thereof — as proof-positive of a media double-standard: Had a Republican candidate written such words, argued Breitbart News senior editor-at-large Ben Shapiro, he or she would have been sidelined from the election.

"Welcome to the 2016 presidential race, where Republicans are targeted for scandal when the media deliberately misquote them, but Democrats get away with behavior that would make Caligula blush," Shapiro wrote.

The candidate himself distanced himself from the piece.

"Over forty years ago Bernie Sanders wrote an article that in no way reflects his views or record on women," Sanders spokesman Michael Briggs said in a written statement. "This was a dumb attempt at dark satire in an alternative publication intended to attack gender stereotypes in the 1970s, and it looks as stupid today as it was then."

Briggs, whose boss often decries the media's focus on "gotcha politics," suggested there might be better things to cover than Sanders' long-lost literary transgressions.

"When Bernie got into this race he understood that there would be efforts to distract voters and the press away from the real issues confronting the nation today," the spokesman wrote. "He’s determined to run a campaign that takes on the big problems facing the American people, and not a campaign of salacious gossip and innuendo."

In that argument, Briggs found an unusual ally: the National Review's Charles Cooke.

Like his conservative peers, Cooke argued that such an essay, if written by a Republican, would cause the liberal establishment to go ballistic. Cable news talking heads would blather on about it, "snarky memes" would inundate the internet and "we'd see a host of think pieces on the GOP's apparent 'rape problem.'"

Whether Sanders was "young and foolish" when he wrote it or "had bought into all sorts of faddish psychology" was beside the point, the National Review scribe argued.

"Sure, the Democratic party would crucify a Republican for the same offense. But they shouldn’t. A society in which people are drummed out of politics for things they wrote 43 years ago is an ugly society indeed," Cooke wrote. "[U]ntil I see any sign of actual wrongdoing I’d much prefer to slam Sanders for his dangerous and ridiculous politics than to delve back into his past and embarrass him with a long-forgotten opinion."

Despite all the coverage, there appeared to be little consensus in the media as to what "man-and woman" really is. While Briggs referred to it as "a dumb attempt at dark satire," others characterized it alternately as an "essay, an "article" or a "column."

The conservative Media Research Center's Dan Joseph offered perhaps the most literal and least charitable interpretation: that Sanders was opining that all men "fantasized about women being abused. He also claimed that women fantasized about being gang raped."

"Sanders didn't specify as to how he had gained such a deep understanding of the male psyche," Joseph wrote.

It's difficult to tell what Sanders was really trying to say, though Joseph's reading appears to be a bit of a stretch.

Are those first, troubling lines a celebration or an indictment of what Sanders believed were common male and female fantasies? Are they a satirical take on the contents of such men's mags as Stag, Man, Hero and Tough, to which Sanders refers in the next paragraph? Or was this actually a work of fiction — not an essay at all?

That last theory is supported by the closing lines of the piece: heated dialogue between a man and a woman who appear to be breaking up after a long relationship. Perhaps the fantasies described at the beginning belong to the characters at the end — imagined or real. Does that make it any more palatable?

Without understanding the nature of the piece, it's tough to divine what Sanders believed at the time — whether or not that even matters 43 years later. One thing, however, is perfectly clear: It's probably for the best that Sanders pursued a career in politics, not writing.