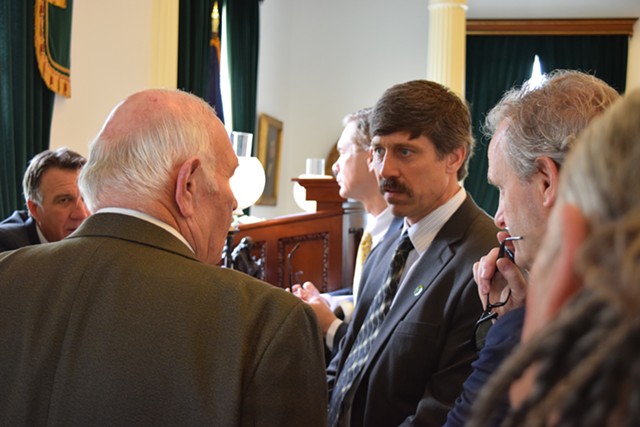 The final days of the legislative session focus mostly on the biggest bills: budget and taxes. But in between, lawmakers jockey for their pet bills.

Friday, Rep. Patrick Brennan (R-Colchester) spent a fair bit of time buttonholing senators, trying to find new life for a bill that would legalize the use of gun suppressors. The devices — also known as silencers — can prevent hearing damage and make peace with shooting-range neighbors, he argued to any senator who would listen.

The measure had been on an economic development bill that the House passed, but was jettisoned in that bill's conference committee. Brennan wasn't giving up.

Senate Judiciary Committee chair Dick Sears (D-Bennington) objected. His committee had spent weeks agonizing over a gun-control bill and the notion of legalizing gun suppressors never came up, he said.

"I'm worried that we're making decisions at the last minute," Sears said. "We’ve had, since the Al Capone days, a law against silencers."

By Friday afternoon, Sears relented after he succeeded in limiting the use of suppressors to shooting ranges. The Senate easily passed the measure.

Down the hall in the House, Brennan's fellow Republicans were so eager to get the House on board that they offered one of their few late-session bargaining chips. They declared that if the House also approved H.5, they would go along with suspending House rules to allow passage of a renewable energy bill that Democrats strongly support. The slow-moving energy bill was at risk of not making it through if legislators adjourn for the year Saturday.

Rep. David Deen (D-Westminster) asked House Speaker Shap Smith (D-Morristown) if he would go along with passing H.5 as the two passed in the Statehouse hall late Friday afternoon. "I have no idea what H.5 is and I don't care," said Smith, who was mired in stalled tax talks with the governor.

A short time later, both the gun bill and the energy bill passed and were on their way to the governor. The two pieces of legislation were completely unrelated, except that they were both in the same place at the same time.