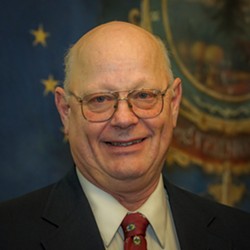 Sen. Norm McAllister (R-Franklin) is reconsidering his decision to resign from the Vermont Senate, according to a close ally.

"I don't know what made him rethink it, but he has decided — he's rethinking it is all I can say," Sen. Peg Flory (R-Rutland) said Wednesday afternoon.

Flory has spoken regularly to McAllister since his arrest last Thursday on sexual assault charges. She told Lt. Gov. Phil Scott Monday morning that McAllister had decided to resign and would do so within a day. Scott relayed that information to members of the media.

In brief interviews with several reporters Monday afternoon, the Franklin County Republican denied that he was stepping down. “I’ve not made up my mind in any which way," McAllister said.

He did not immediately respond to a request for comment Wednesday, nor did his lawyer, Brooks McArthur.

Flory said McAllister told her Tuesday afternoon he was reconsidering his decision after speaking with his attorney and members of his family. Flory said she did not — and would not — encourage him to resign, though she believes it's in his best interest.

"I understand the pressure he's under. I am not going to put him under more pressure. He is the one person who knows what did or didn't happen in all these allegations, and I am not going to substitute my judgment for his," she said.

Senate President Pro Tem John Campbell (D-Windsor) said Wednesday he would be disappointed if McAllister chose not to resign.

Asked whether the Senate would take any action if McAllister decided to remain in office, Campbell said, "I don't know exactly what powers we would have, but that's something I will be looking into."

According to the Vermont Constitution, "The Senate shall have the like powers to decide on the election and qualifications of, and to expel any of, its members, make its own rules, and appoint its own officers, as are incident to, or are possessed by, the House of Representatives."

Neither the Constitution nor the Senate rules outline how the Senate would go about expelling a member.

VTDigger.org first reported that McAllister was reconsidering his decision to resign.