Muji Karim was a standout athlete in three sports at Burlington High School. When the 2001 graduate returned to his alma mater Friday afternoon to talk with student athletes, he reminisced about scoring game-winning touchdowns and buzzer-beater three-pointers.

Karim, who went on to play football for the University of New Hampshire, is once again attracting attention for his athletic prowess. This time, though, he's competing with prosthetic legs.

In 2011, after getting trapped in a wrecked car that caught fire, he had both legs amputated. The soft-spoken man told several bleachers full of lacrosse, baseball and track athletes about overcoming depression after the accident. "How you deal with adversity will determine your quality of life," he said.

Karim, who is black, said, "The biggest issue was when I got prosthetics, my legs were white." He joked to his physical therapist, "As soon as I get my black legs I'm gonna be naturally more athletic."

Eight months ago, he got a new pair of legs — prosthetic blades made out carbon, designed for running. Soon afterward, he ran a 100 meter race in 14.8 seconds, qualifying as an "emergent athlete" for the Paralympic Games, which will be held next summer in Brazil. 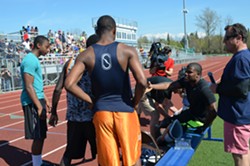 Karim, who's running the same events he ran at Burlington High — the 100 meter and 200 meter — still needs to shave a second or two off his times to qualify. He's raising money to travel to a qualifying event in Arizona and, if he succeeds, to Brazil after that.

A handful of track athletes ran several lengths of the football field with him following his speech. Afterward, when asked about his prospects, Karim responded, "Everything will work out as long as I keep beating people."