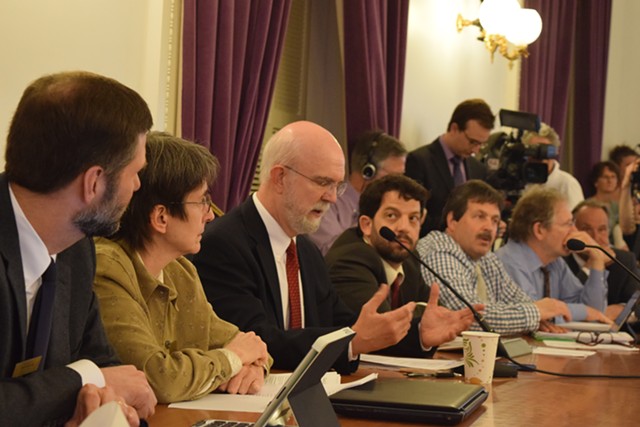 When the 2015 legislative session started, House leaders had no interest in poking what they thought was a sleeping giant of an issue — childhood vaccinations.

But the giant refused to remain asleep. So, next week — just as the session is wrapping up for the year — the House will have that difficult debate.

“It was not a priority of the House, but it’s here,” House Speaker Shap Smith said Friday.

The issue is here because the Senate voted relatively late last month to remove the philosophical exemption that allows parents to opt out of vaccinations for their children. Senators attached the measure to a House bill that deals with other health records. From the House's perspective, it appears more expedient to tackle the issue this year than to delay it until next year.

And while the House defeated a similar measure three years ago, sentiment has shifted. "Some people who were noes then are clearly yeses now," said Rep. George Till (D-Jericho), the House's only medical doctor, who strongly supports removing the exemption.

Among those who've changed their minds: House Health Care committee chair Bill Lippert (D-Hinesburg). He went from voting to keep the exemption three years ago to being on the fence to now leaning toward removing the exemption.

“We need to find ways to increase the level of vaccinations in Vermont,” Lippert said Friday after his committee took three days of emotional testimony on the matter. Lippert said he's received a flood of emails and phone calls from people on both sides of the deeply divisive issue.

His committee has called a public hearing for 5:30-7:30 p.m. Monday at the Statehouse. The full House will likely vote on the issue Tuesday or possibly Wednesday, Lippert said.

The outcome is anybody’s guess, said House Majority Leader Sarah Copeland Hanzas (D-Bradford). “There’s a chance it could fail,” she said, noting that Democrats won't urge members to vote one way or another.

A report released this week indicates that efforts to educate parents, which legislators approved three years ago, aren’t working to persuade more to vaccinate their children.

The percentage of parents opting for exemptions or receiving provisional admittance to school for their children without vaccinations rose from 5.4 percent in 2011-12 to 6.1 percent in 2013-14, according to a report released this week by the Vermont Health Department. Vermont is among 20 states that allow philosophical exemptions. Forty-eight states, including Vermont, also allow religious exemptions.

Lippert’s committee fielded a firestorm of emotional testimony this week, including a celebrity visit from Robert F. Kennedy Jr., who argued that the government can't be trusted to protect people from greedy pharmaceutical companies. The committee also heard from those who said keeping the philosophical exemption could kill their kids and others who said forcing their kids to get vaccinations could kill them.

Lippert said he expects that if the House votes to remove the exemption, it might delay the effective date for a year.

There may be alternatives. Rep. Anne Donahue (R-Northfield), a member of the House Health Care Committee, is proposing stricter rules for parents who want to choose a philosophical exemption. Under her plan, parents would have to sign a notarized affidavit affirming they have had an in-person consultation with a doctor about vaccinations and are seeking alternative medical treatment. Under a law passed in 2012, parents now have to sign a form saying they have reviewed materials about vaccinations to be eligible for the philosophical exemption.

“I am convinced from the testimony that it’s essential we increase the rate of vaccinations,” Donahue said.

State Health Commissioner Harry Chen said this week that he supports removing the philosophical exemption and would like legislators to act on it this year.

His boss, Gov. Peter Shumlin, is less eager. Shumlin said Friday he’d prefer to let educational efforts continue. But he said he doesn’t buy the notion that vaccinations are dangerous. He met with Kennedy when he visited, but said, "No, I did not tell RFK he's full of hooey."