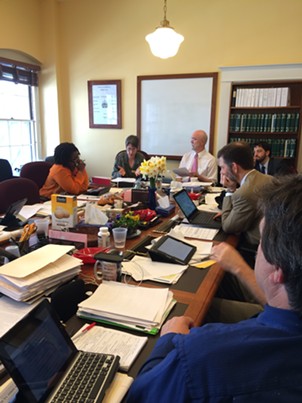 The House and Senate are preparing to face off over this year's health legislation. It's clear that the final result will be a shadow of the reform that many lawmakers had expected — even after Gov. Peter Shumlin pulled the plug on moving the state to a government-financed system covering all Vermont residents.

Shumlin had tried to maintain momentum on reform. He proposed a multi-million-dollar initiative to increase Medicaid payments for medical treatment. Right now, when the state's Medicaid shorts providers, they make up the difference by requiring private insurance to pay more. Shumlin's proposal fizzled because lawmakers rejected the funding mechanism — a payroll tax — and questioned whether the investment would lower costs for Vermonters with private insurance.

Next week's negotiations will sort out whether the state can afford just $5.1 million for health initiatives or $8.8 million. The Senate advocates the leaner plan. And the two sides must also find consensus on how to raise this money. The Senate expanded an existing employer assessment while the House suggested taxing candy, soft drinks, vending machine food and tobacco products.

The Senate sent its version of the bill to the House Thursday night. The House Health Care Committee voted 9-0 Friday to disagree and demand negotiations.

"There is very little here," said Rep. William Lippert, chair of the House Health Care Committee. For example, he noted that the Senate recommended only enough funding to maintain the current level of financial aid for Vermonters who struggle to meet their health insurance deductibles, while the House voted to give eligible individuals more assistance.

"They brought in other worthy things, but it dilutes the priority the House had," Lippert said.

Senate Appropriations chair Jane Kitchel (D-Caledonia) defended the Senate bill. "In this budgetary environment, it seemed like a significant response."

Senate Health and Welfare chair Claire Ayer (D-Addison) said she and Sen. Virginia Lyons (D-Chittenden) tried to win support from their Senate colleagues for additional funding to increase the amount of cost-sharing aid. Most recently the pair suggested a dollar increase in the tax on cigarettes, she said, "but we couldn't even peddle that."

While Ayer is disappointed with the bill, she said, "We haven't gone backward." She pointed to the study of implementing universal primary care coverage that both the House and Senate funded. "Our idea was even though we had a flat tire on the way to universal health care, we wanted to keep moving," Ayer said.

Dr. Deb Richter, president of Vermont Health Care for All, applauds lawmakers' agreement to fund that study. "That is why I have been here every day, so I feel really good," she said.

Senate Republican Leader Joe Benning sees that same provision as "a set-up to move us down the same path" toward a single-payer health care system. "I'm not in favor of the path we are going down in health care," he said.

The House will vote Monday to tell the Senate it disagrees with the current version of S.139 and wants to begin negotiations. The two sides will have only until the end of the week to settle their differences if any health care legislation is going to come out of the 2015 session.