Trooper Who Resigned Under Pressure Posts Online Explanation | Off Message 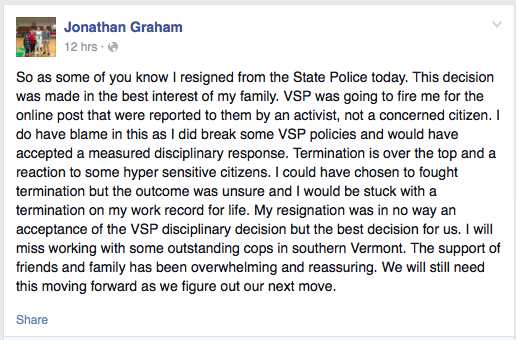 A Vermont State Police trooper who resigned after authorities opened an investigation into what they called his "egregious" Facebook posts took to the social media site to say that he had been targeted by "hyper sensitive citizens" and thought his bosses had overreacted.

Jonathan Graham, who was a corporal, said that Vermont State Police officials had threatened to fire him, and that he resigned Thursday even though he in "no way" accepted their decision.

"VSP was going to fire me for the online post [sic] that were reported to them by an activist, not a concerned citizen," he wrote on his Facebook page, later adding, "Termination is over the top and a reaction to some hyper sensitive citizens."

On Thursday, Col. Tom L'Esperance and Public Safety Commissioner Keith Flynn said an internal investigation into Graham's posts had determined that many of them "rose to a level of extreme concern for the Vermont State Police."

On Graham's public Facebook page, he mocked expressions of homosexuality, criticized a teenager who posted negative comments on social media after Graham pulled him over, and poked fun at former Olympian Bruce Jenner, who has been undergoing gender reassignment procedures. "First step to become a woman: Drive like one," said a caption on a photo he shared of Jenner, who was recently involved in an accident.

Graham did not respond to a message seeking comment, but his daughter defended him in a letter published in the Rutland Herald, saying "forced resignation is far too harsh a punishment for my dad's actions."

WCAX, which broke the story of the initial investigation, reported that Graham of Springfield was a 15-year state police veteran who worked out of the Rockingham barracks. He's also a member of the U.S. Coast Guard. In 2009, Graham was honored with a lifesaving award at the Statehouse for rescuing a young girl from drowning.

Graham's Facebook posts contain many colorful comments about a range of social issues. 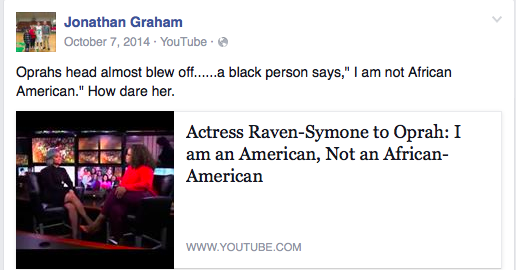 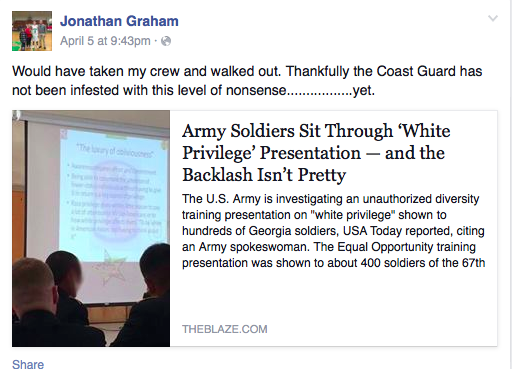 When Gov. Peter Shumlin appointed former Windsor County public defender Kevin Griffin to become a judge in 2012, Graham linked to an article and commented, "Great, just what we need. Another defense atty on the bench."

On at least one occasion, Graham implied his State Police and Coast Guard duties had overlapped.

In other posts, Graham discussed traffic stops in which he was involved.

In comments under that post,  Graham said, "Oh Yes ... we SHALL cross paths again and the outcome will justify his current status."

Graham then had an exchange with some Facebook friends about the post. Graham told one that he had "creeped FB" before and used it to gathered evidence.

"Some people are so stupid when it comes to what they post," Graham observed.

State Police spokesman Scott Waterman told Seven Days, "The internal investigation was incomplete at the time of Corporal Graham’s resignation, thus there was no official conclusion made about any action to be taken. Due to the nature of the internal investigation into a Vermont state trooper, I cannot comment on the substance of Jon Graham’s social media content, or the evidence presented to us by a concerned citizen."

In a statement, L'Esperance apologized to "anyone who had been offended by any of Corporal Graham's posts made while employed as a state trooper."

"I accept Jon Graham's resignation for all citizens who expect and have a right to a fair and impartial state police force," L'Esperance said. "I also accept Jon Graham's resignation for all Vermont state troopers who selflessly serve our communities and commit at the beginning of every shift to enforce the laws of our state without bias or prejudice, no matter their personal beliefs. I believe strongly that we are accountable for our actions. I commit the Vermont State Police to continue to build the community's faith in this department."