A Less Raucous Protest Puts Statehouse on Alert | Off Message 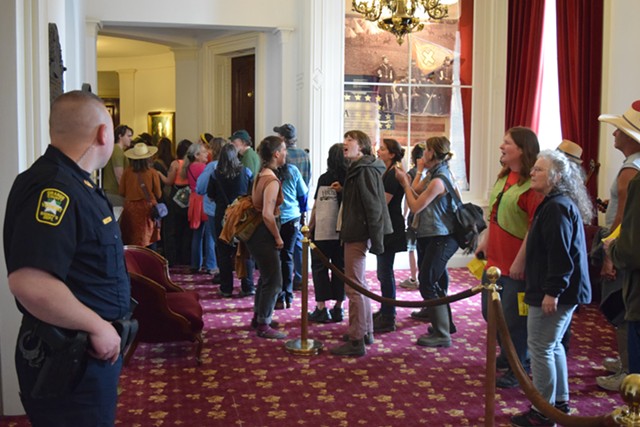 Four months after activists were arrested while interrupting Gov. Peter Shumlin’s inaugural, Statehouse police were on high alert Friday as May Day protesters streamed into the building.

“We did have a plan,” said Janet Miller, the Statehouse sergeant-at-arms, who won election to her job after the January protests, in part over concerns about Statehouse security. “We knew protesters may be coming in.”

“Hey, hey, ho, ho, white supremacy has got to go,” protesters chanted as they passed the legislative chambers carrying signs that touted a variety of causes. Their noise prompted the Senate to temporarily stop action. A school group ducked into the Senate chamber to avoid the protesters.

No protesters tried to enter either the House or Senate chambers. Officers never confronted them and no arrests were made, Miller said. Though the protests were far milder than those at the inaugural in January, some legislators were irritated that protesters were allowed in the Statehouse at all.

“They should not be allowed to protest in the building,” Sen. Dick Sears (D-Bennington) told Miller in the Statehouse hall after the protesters had left. “If they do, they should be removed.”

Keith Brunner, spokesman for the Vermont Workers Center, which organized a May Day rally on the Statehouse steps, said protesters had no plans to get arrested this time. But, he said, they wanted to make their feelings known.

“The general perspective is people are pretty disillusioned with what’s going on in the Statehouse,” Brunner said, referring to budget cuts and Shumlin’s decision not to pursue universal health coverage.

Protesters chose not to stay inside the Statehouse very long this time before heading back outside for a more traditional rally on the lawn. By contrast, 29 protesters were charged with trespassing in January when they refused to leave the House chamber.