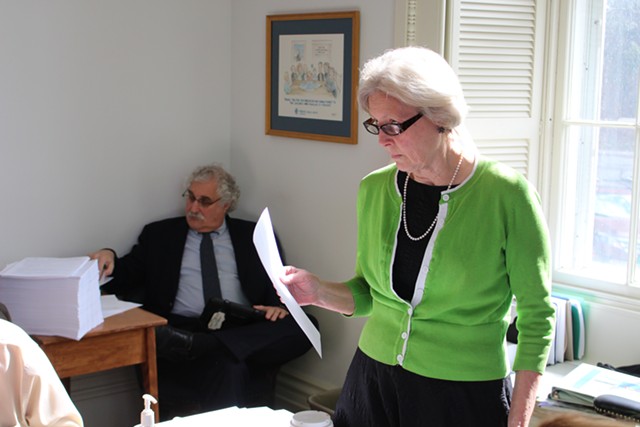 Gov. Peter Shumlin’s erstwhile allies in the Democratic legislature lashed out at him Thursday for pushing new cuts after the Senate Appropriations Committee signed off on the budget.

“It’s insulting to the process,” complained one top Dem.

The Senate had been scheduled to debate its $1.47 billion general fund budget Thursday morning. But late Wednesday, the administration delivered word that it would produce millions more in budget savings ideas.

That left some wondering why the governor waited so long.

“In the time I’ve been in the legislature, it’s never happened: to come in and say, ‘Oh, we’ve got some suggestions for you,’ after the committee has passed its budget,” said Sen. Jane Kitchel (D-Caledonia), who chairs the Appropriations Committee.

Shumlin dispatched Finance Commissioner Jim Reardon and Secretary of Administration Justin Johnson to the committee Thursday morning to deliver a hodgepodge of ideas they said would save roughly $8 million.

They suggested cutting another $2.87 million from state workers’ salaries, on top of the $10.8 million already approved. Roughly $2 million would come from weatherization funding, $900,000 from the Brattleboro Retreat and $300,000 from working lands grants.

Committee members reacted warily to the ideas, which they complained hadn’t been properly vetted. “It’s been pretty lonely in there all winter,” Sen. Bobby Starr (D-Essex/Orleans) said, referring to the Appropriations Committee, on which he serves. “I woulda thought they would’ve been in at least a month ago, if not five, six weeks ago, offering some suggestions.”

When the Senate finally took up the budget Thursday afternoon, no members offered amendments to adopt Shumlin’s ideas. Instead, after several hours of discussion and debate, they took a preliminary vote of 23 to 6 in favor of the budget as written. A final vote is scheduled for Friday.

Kitchel said late Thursday her committee was likely to approve one idea advanced by the administration: to realize $1.3 million in savings identified by the state’s new Medicaid pharmacy vendor. But she said the other suggestions would have to wait until the House and Senate meet in conference to reconcile differences between their respective budgets.

Members of the House, who voted for their own version of the budget in March, sounded particularly peeved about the process.

“It’s definitely too late to be helpful,” said Rep. Sarah Copeland Hanzas (D-Bradford), the Democratic majority leader. “I’ve seen this kind of thing before, but not usually from my friends.”

She noted that Shumlin’s own January budget proposal assumed a shortfall of $94 million. After a revenue downgrade the next week upped that figure to $113 million, he declined to say how he’d fill the gap.

Shumlin initially proposed $112.7 million in new taxes on an annualized basis — including a since-abandoned, 0.7 percent payroll tax — far more than the House approved.

“It’s a little perplexing how it is the governor can suggest that the legislature is spending too much and raising too much when his January proposals both spent more and raised more than what the House passed,” Copeland Hanzas said.

Johnson, the administration secretary, reacted cooly to the criticism.

“I think that it’s the time of the year in here where lots of things come up and people get a little wound up,” he said. “I think we just have to focus on getting a budget and revenue package out that makes sense and that everyone can agree on. We’re gonna keep working on that.”