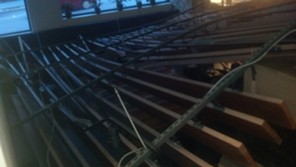 Four were transported for medical attention, and another person was lightly injured, said David Roberts, a deputy chief with the Burlington Fire Department.

Hans van Wees, the hotel's general manager, had just headed into his office off the lobby when the ceiling fell. He arrived at the scene quickly. "Everybody was fully conscious, standing up," he said. Within five minutes, he said, emergency medical responders arrived.

In winter months, wood blazes in a fireplace there, and people sip cocktails served by waitstaff from Juniper, the hotel's bar and restaurant.

Roberts estimated that the ceiling was about 20 by 15 feet, and said it was made of 2-by-8-inch wood boards. A few other similar ceilings in the hotel were to be inspected for possible problems, and the areas under them would stay clear for now, he said.

"We're not concerned those are unsafe, but we'd rather have them inspected," said van Wees.

It was a busy night at the hotel, and guests were allowed to stay. Not long after the collapse, Juniper staff were serving customers at the bar, just past the yellow tape that marked off the area where the ceiling had fallen.