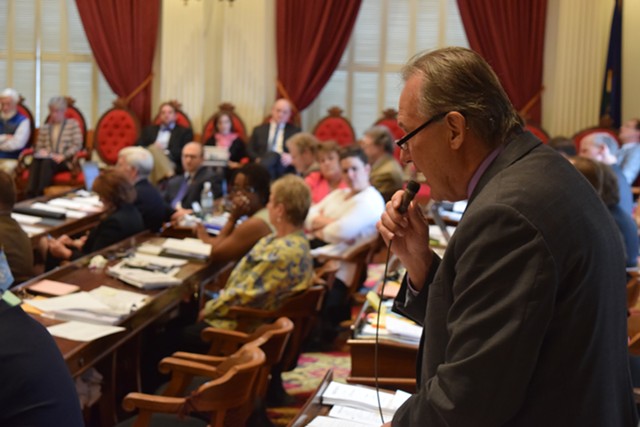 Impassioned opponents fell short Wednesday when they made one last pitch in the House to undo a 2013 state law that allows terminally ill Vermonters to hasten their own deaths.

Since the law took effect in May 2013, seven Vermonters have requested a lethal dose of medication. That's the only information that the state can publicly report on the law.

“It’s working in Vermont,” said Rep. Sandy Haas (P-Rochester). She cited stories told by friends and family of some of the patients as evidence.
Friends of Annette Vachon and Maggie Lake, both of whom used the law, told legislators that the women found comfort in having the option after long battles with terminal illnesses. Seven Days has chronicled both Vachon’s and Lake’s stories. Wednesday’s House debate featured fewer signs of the deep emotions this issue has generated. There were no crowds packing the House chamber as there were two years ago, and none of the brightly colored stickers supporters and opponents wore to declare their sides.

But some opponents remained just as passionate. Rep. Anne Donahue (R-Northfield) argued for repealing a law she described as deeply flawed. "How can we say today it's working as intended?" Donahue said. We don't have the information."

Last-minute changes to win enough votes for passage in 2013 stripped important safeguards that Oregon included in its oft-cited law, she said. Vermont lacks both assurance that a patient can self-administer the drug and detailed reporting that allows the public to know how the law is being used, she said.

“It is being pushed on patients, even those not terminally ill,” Donahue said. “This existing law is already being abused.”

Donahue recounted meeting a 90-year-old Northfield woman Tuesday who told her that caregivers at two assisted living homes had informed her of the option even though she has no terminal illness. At her former home, Donahue said, the woman was repeatedly reminded of it, while at her current home it was included in her admission information.

Donahue fell short in her effort Wednesday to repeal the law, but said she will try Thursday to change it. She wants it to specify that the Patient Bill of Rights does not require patients to be offered the option to seek a lethal prescription if they don’t ask for it first.

Supporters of the law will fight that change. They argue the law is working as intended.

“I and others are getting comfort from it today,” said Dick Walters of Shelburne, president of Patient Choices Vermont, who has spent more than a decade advocating for the law.

Wednesday’s debate came about because supporters wanted to amend the law to continue regulations that are due to expire in 2016. Those include requirements that patients make their request in writing and that they seek a second opinion.